A dying Nobel Prize-winning nuclear scientist threatens Los Angeles with an unfathomable doom, submerged deeply offshore. Will L.A.'s finest with aid from the U.S. Navy, USCG, FBI, and DHS unravel his ciphered clues and find it in time? Is Southern California's annihilation imminent as the calendar flips to pi day?
A gripping tale of greed, revenge, and intrigue, PI DAY DOOMSDAY leads you into the deranged world of madness and retribution surrounding a malevolent genius, banished from science, living on the edge of insanity, intent on destroying humanity. A thriller like no others, this one holds you in suspense until the last millisecond. 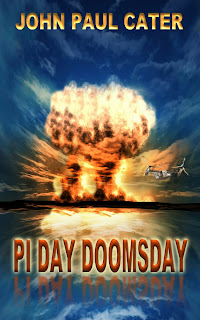 Simon Fogner, PhD, Nobel Laureate, and nuclear physicist, has a score to settle with the world. A mathematical genius, he uses pi to plan the destruction of Los Angeles, and all of southern California. He builds two thermonuclear bombs he names Adam & Eve, and maps out the best location to cause the maximum destruction. He has planned for his two bombs to form the symbol of pi when the nuclear clouds form and touch.

Exposed to the deadly material he is already dying of radiation sickness. His skin is pealing off, and he’s bleeding out, yet he manages to stay alive long enough to place his terrible weapons then leaves a coded poem for authorities; he uses a form of anagram to write his message in the poem, and plans to leave it with the news media. However, when that fails, he drops the envelope through the open window of a California Highway Patrol vehicle parked at a Starbucks. The letters WMD written on the envelope warns CHP Officer Mica Brisco that this could be important. His captain is away for the week, so he drops it off with the Sheriff’s Office. Within 12 hours, his phone rings and he’s ordered to appear at SID for questioning. Arriving, Brisco finds a task force in place, including FBI, Homeland Security, the Sheriff’s Office, Cryptanalysis, Forensic Computer Analysis, Forensic Psychiatrist, and a doctor of nuclear physics. The taskforce – or A-Team - will grow before the case is over, to include the Navy and other civilian specialists. The taskforce is working on the belief there is one bomb, Adam, not realizing there is a second, Eve, until the last hours of pi – 3.14159.

Wow, this is what makes a good movie. With zero hour ticking away, the taskforce must discover the location of the bombs, and either disable them, or make them harmless some other way. Each bomb is at least 20 times the power of the bombs dropped on Japan, and will literally vaporize L.A. in an instant. I was especially taken with the villain – a super villain in every sense of the word. His flesh literally falling off, he should have been dead before he could put his bombs together; yet he not only builds them, places them in the ocean, and runs around L.A. most of the book dressed like the Grim Reaper. The writing is topnotch, the characters are three-dimensional, and the plot is fresh and imaginative. Thriller lovers will not want to miss this one, and I can highly recommend it to readers who just like a good yarn.