See You At The Fair Trading Cards

SEE YOU AT THE FAIR is a new retro-style trading card set from Acheron Mint currently crowdfunding on Kickstarter. It features the pulp heroes (Doc Savage, The Phantom Detective), sports legends, robots, futuristic vehicles and other notable personalities (like AMAZING STORIES editor John W. Campbell)  that populated the 1939-1940 NY World's Fair in a card series done in the style of the Goudey Gum and Gum Inc. releases of the depression era. The project is currently funded but looking to expand to a 20 card set. SEE YOU AT THE FAIR closes on November 26.

On October 27, 1940, the New York World's fair served its last attendees and closed its doors forever. What had started with promise and a symbol of hope of technology, social planning and medicine overcoming poverty and the continuing effects of the Great Depression had ended with a new European war that would soon spread to the entire world. That same technology of the future would soon be used to murder millions of people across the globe. The dreams of flying cars and robotic servants and central databank that could be accessed by anyone with a then-new television quickly faded, victim of the crushing grim reality faced by millions in the first years of World War 2. It wasn't until 25 years later that the small children who had witnessed the fair firsthand, some now parents themselves, could take a nostalgic look at it, now living in the future of THEIR fair. Ironically the 4 wars after 1939 (World War 2, The Cold War, Korea and Vietnam) had brought more change than any fair promoter or civil planner could have ever dreamed of.
And the social change of the late 1960's was only beginning.
The fair continues to fascinate us as does the pop culture of that era. Aimee Mann wrote a song about it. The popular animated TV show is named after its central exhibit. Almost every blockbuster or genre TV show has some roots in the pulp era of the 1930's and 40's. Is it the teardrop shaped cars or the flying wings? It it the hokey and sometimes laughable predictions of the future? Or is it the personalities of the fair? Almost every high profile guest who attended the fair is now a legend.


I wanted to create a set in line with something that Goudey or Gum Inc might have released. These are the personalities of the fair, not pictures of the pavilions. Something that the kids of the era who were already buying Superman Gum and Sport Kings gum would be interested in, as a lot of the high profile guests of the fair had already been featured in sets. It's strange to think why this set was never produced, other than a national gum card set used to promote a regional World Fair at a time when few people could afford to travel didn't make financial sense. Whatever the reason, SEE YOU AT THE FAIR is here, 75 years later.
As with most of my vintage sets, cards will be non-glossy in keeping with the production methods of the era. Noted fan dancer/burlesque queen Sally Rand was included as the single representative of the 1939 San Francisco Expo, the west coast World Fair. Both Doc Savage and Maximus, the giant "goblin" from Doc Savage Magazine's THE WORLD'S FAIR GOBLIN are included, as Doc and the Phantom Detective were the only pulp heroes to visit the fair while it was open. Two New York Yankees are included. The Fantom of the Fair from Centaur Comics was the only Fair-based superhero of the era. Lou Gehrig had just retired and the Yankees won the Pennant in 1939. Johnny Weissmuller would be well known to kids as Tarzan. Slam Bradley was more established than either Superman or Batman in 1939 When he appeared in World's Fair Comics. Frank Buck was one of the biggest stars of the era and Elektro the Moto-Man is still cool, even today. Finally noted designer Norman Bel Geddes, the architect of GM's Futurama exhibit was the focal point of the fair. I wanted both him and one of his streamlined designs to be represented. As usual the style is very pulp like in keeping with the pop culture of the era. H.J. Ward and Hubert Rogers were the main artistic influences.
Like all of my series these will be limited to 145 sets and will include one sketch card per pack....

Included with the base set, for all pledges $28 and over is an original hand-drawn sketch card of one of the 16 subjects in the set, and maybe even a few others! Sketch cards will be inserted randomly in the retail versions but Kickstarter backers will receive a sketch of their choice!

For all pledges $45 and above, a special 12 x 18 inch poster featuring Elektro, The Moto-Man with an Emerald City of Oz theme has been created exclusively for this Kickstarter.

All pledges $28 and over will receive a special "I HAVE SEEN THE FUTURE" pin like those given out at the GM Futurama exhibit.

As always I will be offering prints for this set. This will be the only time these prints will be available, as I am not in the print business. I usually get requests for prints after the campaign has ended but only print enough to fulfill rewards, so if you want them, pledge now! Hang these stunning 8 1/2 by 11 inch prints in your home, office, den, or perisphere with pride.


An array of rewards is offered for this project. Like my previous projects, prints will only be available through Kickstarter and will not be available for retail. So pledge now if you want them!

The artwork is 90 percent complete, aside from color, contrast, brightness correction, correcting eye and hair color, spelling corrections, and minor details of that nature. There is always some frustration and delays from dealing with a commercial printer, but once the funds are released, essentially all there is to do is click a few buttons to send printing orders off. My previous five Kickstarters have all shipped no later than a few weeks off schedule. I've been doing this sort of thing for over a decade now, and shipped to every continent except Antarctica.
Posted by Tom Johnson at 5:15 AM No comments: 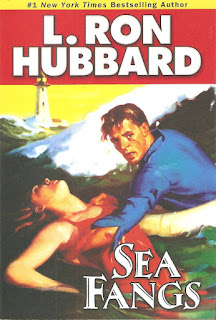 Bob Sherman has a strength of character and purpose that would make Spencer Tracy proud.  But signing on to the crew of the yacht Bonito, he’ll need every ounce of his strength and courage to overcome the forces arrayed against him—in Sea Fangs.
He’ll take on the forces of nature—a hurricane smashing into the boat off the Venezuelan coast.  He’ll stand up to the forces of ignorance—Bonito’s incompetent captain. He’ll defy the forces of corruption—the boat’s owner, who stripped him of his land years ago. And he’ll fight the forces of evil—a ruthless band of pirates who take all aboard, including the owner’s daughter, to the uncharted Island of Death.
His fate intertwined with a woman whose father stole everything he valued, Sherman is about to discover that there’s one force as powerful, unpredictable and dangerous as the sea itself . . . the force of a beautiful woman’s love.

“ A Great Tale of Rough Seas and Pirates.”

Bob Sherman had lost everything to a greedy man, and then was held captive among a band of pirates. Escaping from the Island of Death, he made plans to regain what was taken from him, finding passage as a sailor on the Bonito, only to be thrown into a raging hurricane, then cast back on the shores of the Island of Death once more. But this time they have the woman he loves, and win or lose he’ll do anything to save her.

This was another great adventure tale from the imagination of L. Ron Hubbard, a writer who crossed many genres during his pulp career. This action yarn was originally published in the June 1934 issue of FIVE NOVELS. Highly recommended for anyone that loves a great action adventure yarn.

Posted by Tom Johnson at 5:05 AM No comments: 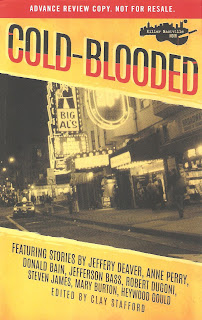 This collection of new stories features some of the biggest names in suspense, from bestsellers to ferociously talented newcomers. Grouped around the classic theme of murder, Killer Nashville Noir: Cold-Blooded is a first-class collection and a must-have for fans of the genre.

Posted by Tom Johnson at 4:51 AM No comments: