Jasper And The Shelter of Angels

Take a step into the light of God’s glory. When a construction worker, Jasper, is involved in a workplace accident that renders him blind, he begins a journey, seeing more than he could ever dream possible. After a near death experience, Jasper is granted a second chance at life. Awakening in a hospital, he crosses paths with a company of Seven divine Angels. Diagnosed to have brain damage, Jasper becomes ensnared in the spiritual warfare between Angels and Demons.
A specific band of Demons, The Insufferable Six, try to thwart the good efforts of the Seven Angels at every turn, but will Jasper be the element to tip the balance for good or evil? Find out how Seven Celestial friends help to lead a blind man to the ultimate confrontation with the Devil and help to strengthen the earth. 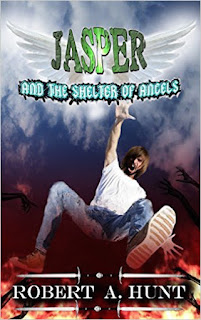 “War Between Good And Evil.”

Jasper works for Princeton Construction Corp. in Princeton, near the Cascade Mountains. One day he is helping his buddy pull the bell on top of the new church when the bell slips off, and thinking of his buddy’s safety first, Jasper attaches his safety line to him, and is himself pulled off the roof with the bell. He falls hard, hitting his head against the concrete, and is taken to the hospital. He’s considered blind, and may have brain damage also. But strangely he can see – especially the demons and angels. God sends seven of His angels to help Jasper: West, Starr, Wilson, Joel, Elana, Taila, and Roger. The Devil sends The Insufferable Six: Morbidant, Dialucious, Krustatious, Wengroangrinch, Vyxcious, and Gewgaw to interfere with them. It’s a constant battle between good and evil, and Jasper appears to be the prize.

This made a good Sunday School lesson, and we are treated to Bible study, as well as seeing the every day struggle people face with good and evil decisions we make. The story is told with some humor, as the doctors and nurses think Jasper is crazy. After all, not only does he see angels, he sees them at war with demons in the hospital. But then we also see Jesus bring about Satan’s end, and the Kingdom of Heaven in all its Glory. What a wonderful story. Highly recommended especially for Christians, and suggested reading for everyone.

Email ThisBlogThis!Share to TwitterShare to FacebookShare to Pinterest
Labels: Christian Fiction, Jasper And The Shelter of Angels, Robert A. Hunt, Wordpainter Publishing