The greatest deceptions are never suspected. After twenty years with the Tararian Selective Service, Cris Sietinen is in the unprecedented position of being both Lead Agent and heir to a High Dynasty. Family, career, information—it would seem he has it all. But when his fourteen-year-old son, Wil, is captured by the mysterious Bakzen, Cris is forced to question all that he once took for granted in his life. Only one thing remains clear: it's imperative he rescue Wil. What Cris and Wil learn in the process will change their perception forever. Veil of Reality is the second installment in the Cadicle series, a new space opera epic with elements of "Dune" and "Ender's Game." This fast-paced adventure novel with intrigue, danger and self-discovery begins to untie the knot of secrets binding the TSS, High Dynasties and the Priesthood. 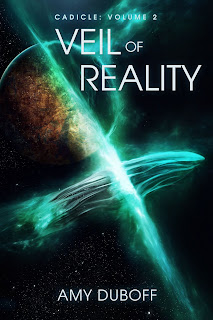 “Science Fiction At Its Best.”

In this sequel to ARCHITECTS OF DESTINY, it has been two decades since we left Cris and Kate Sietinen. Their son, Wil, is 14 and shares their heightened ability of telekinetic powers, and shows signs of hidden strength that might prove beneficial to either side in the ongoing war between the TSS and the Bakzen Empire. A traitor within the TSS opens a doorway for a Bakzen team to enter the headquarters and kidnap Wil. Cris is given the ship, Vanquish, and penetrates the Bakzen defensive net to rescue Wil. In the process, Cris and Wil learn more about the ongoing war with the Bakzen Empire, and the people behind the conflict.

There are still secrets being kept from them, but the readers learn more about the reason for the war, and now the status of good and evil is not so easily defined. The more I get into this series, the more I’m reminded of the Null-A series by A.E. van Vogt, and the game players that sparked that series. Like the great science fiction of the early years, the Cadicle series has a feel of inspired prediction for our future. Whether a fan of early SF, or modern, readers will find “Veil of Reality” a great read. Highly recommended.


Author of WORLDS OF TOMORROW
Posted by Tom Johnson at 4:20 AM