The Cemetery of The Swallows

Superintendent of Police, Amedee Mallock has turned his office into Fort Mallock. He has five assistants, which he calls his fingers: Thumb, Little Finger, Index Finger, Ring Finger, and Middle Finger. He will need his whole hand to solve the latest case. Manuel Gemoni, the younger brother of Mallock’s Little Finger has disappeared. Manuel is intelligent, a teacher, and a loving family man. When he turns up, why is he in the Dominican Republic, and why did he assassinate an old man?

Curiously, it appears to be a case of reincarnation, as Manuel tells a story of his previous life, as Jean-Francois Lafitte, a French soldier in WWII. The man he killed was an SS officer who captured and tortured the men in his unit in 1944, killing them all. Everything he tells them is revealed as fact, though all of it was secret, and Manuel could not have learned it through research. Mallock hopes the evidence of reincarnation is enough to give a jury reasonable doubt, and set Manuel free. When it doesn’t, Mallock has to look at the case again, to see if there was something he missed.

This was a fascinating mystery. All through the investigation we are led to believe it was a real case of reincarnation. The investigators dug into the background uncovering facts not known to anyone but those soldiers killed in 1944. Only until the very last does Mallock put everything aside and discovers the truth. Highly recommended.

These Short Story collections are in the tradition of the classic fiction stories that appeared in the heyday of the pulp magazines; new stories of original characters, as well as new characters in contemporary and historical settings. Although I do take a few liberties with the original characters, I try to keep them true to their origins. For the fan of those great action heroes, as well as the new fan, these stories will give the reader a sampling of the old style while not lacking in action and excitement. As a long time fan and collector, I have complete runs of the major character magazines, and have read them all, so I am truly familiar with the characters I write. I am not just a fan of Doc Savage, and not just a fan of The Shadow, but I am a fan of them all. And I hope that comes through to the reader as s/he reads the following short story collections. 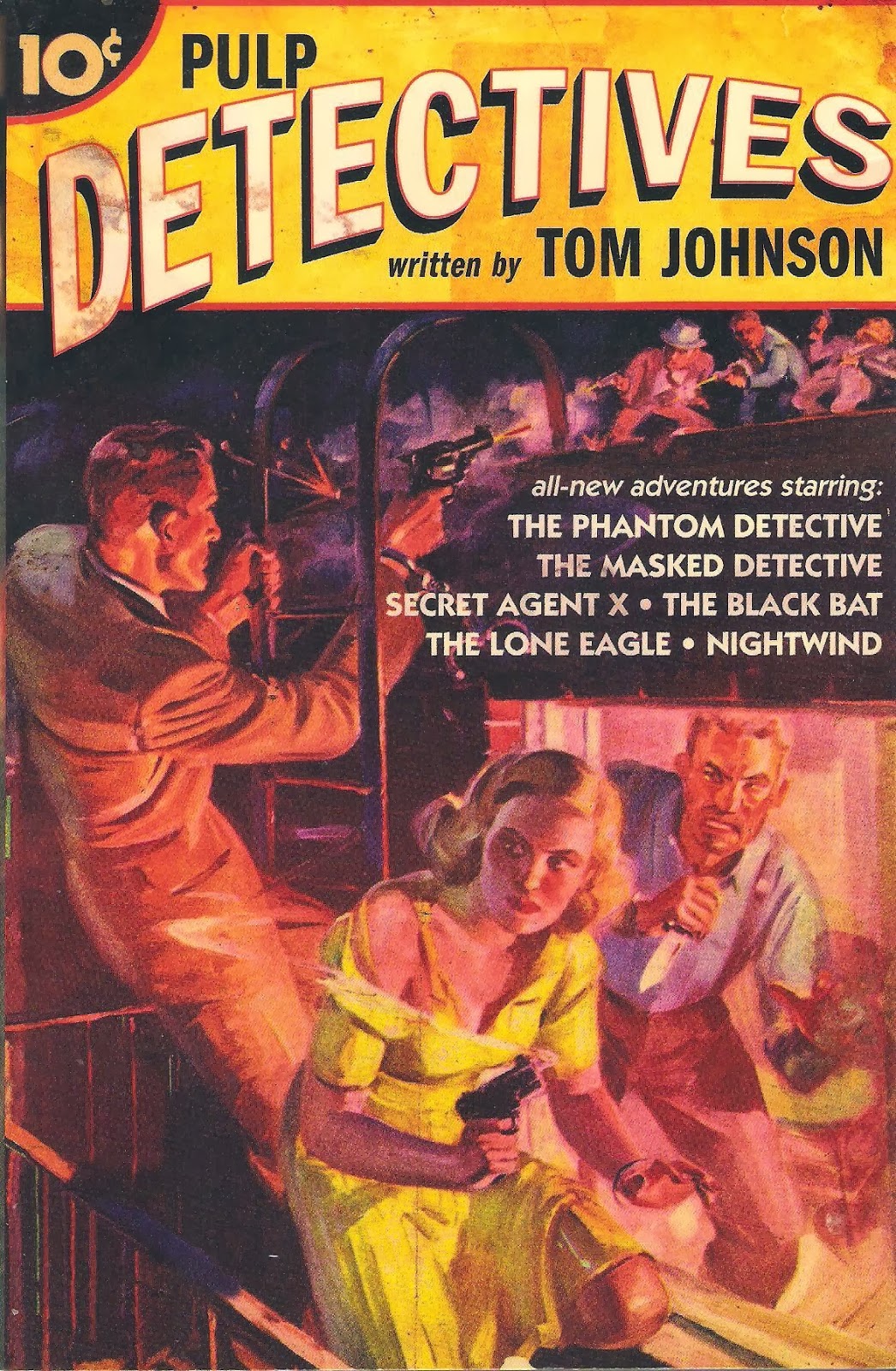 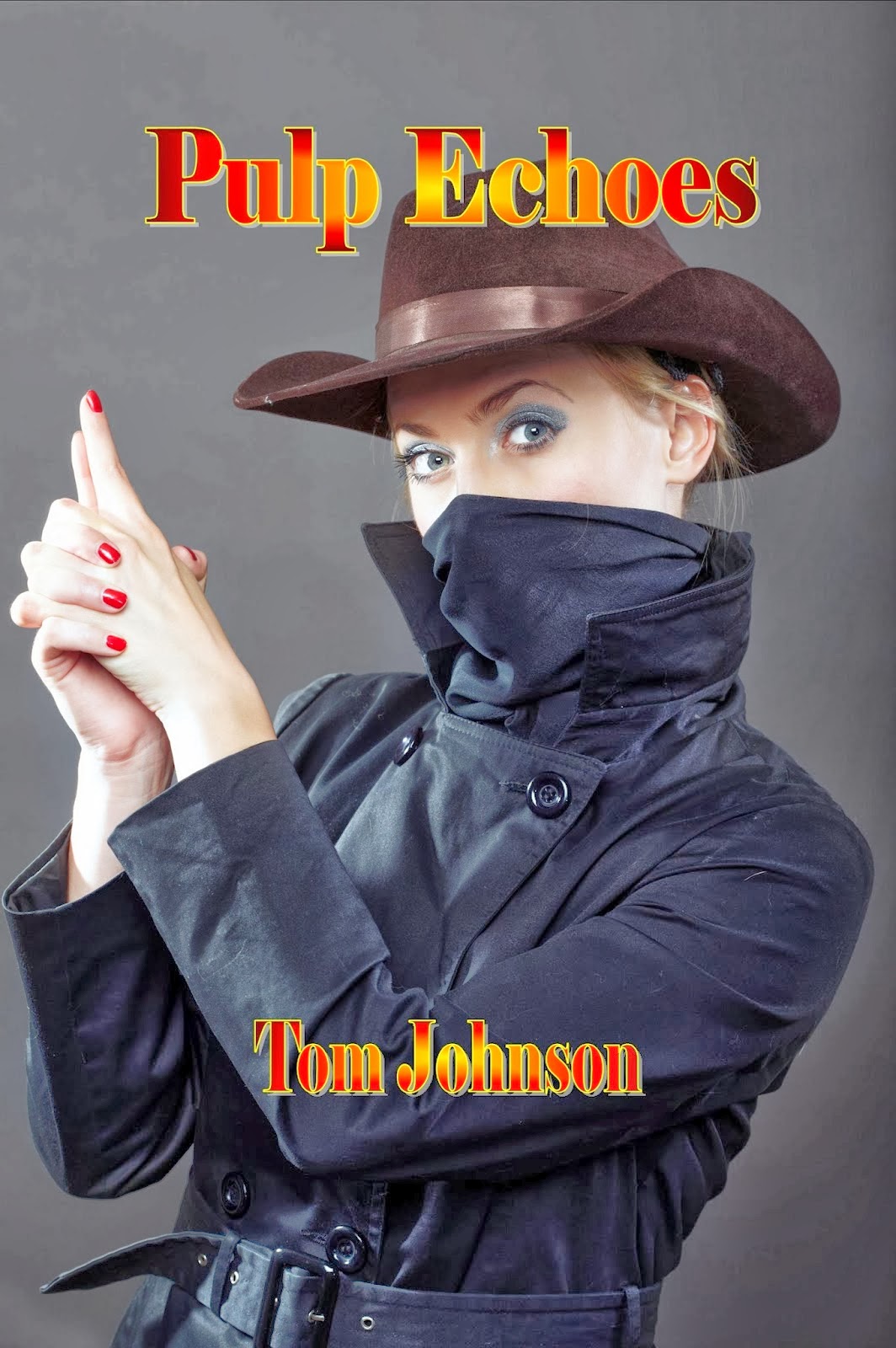 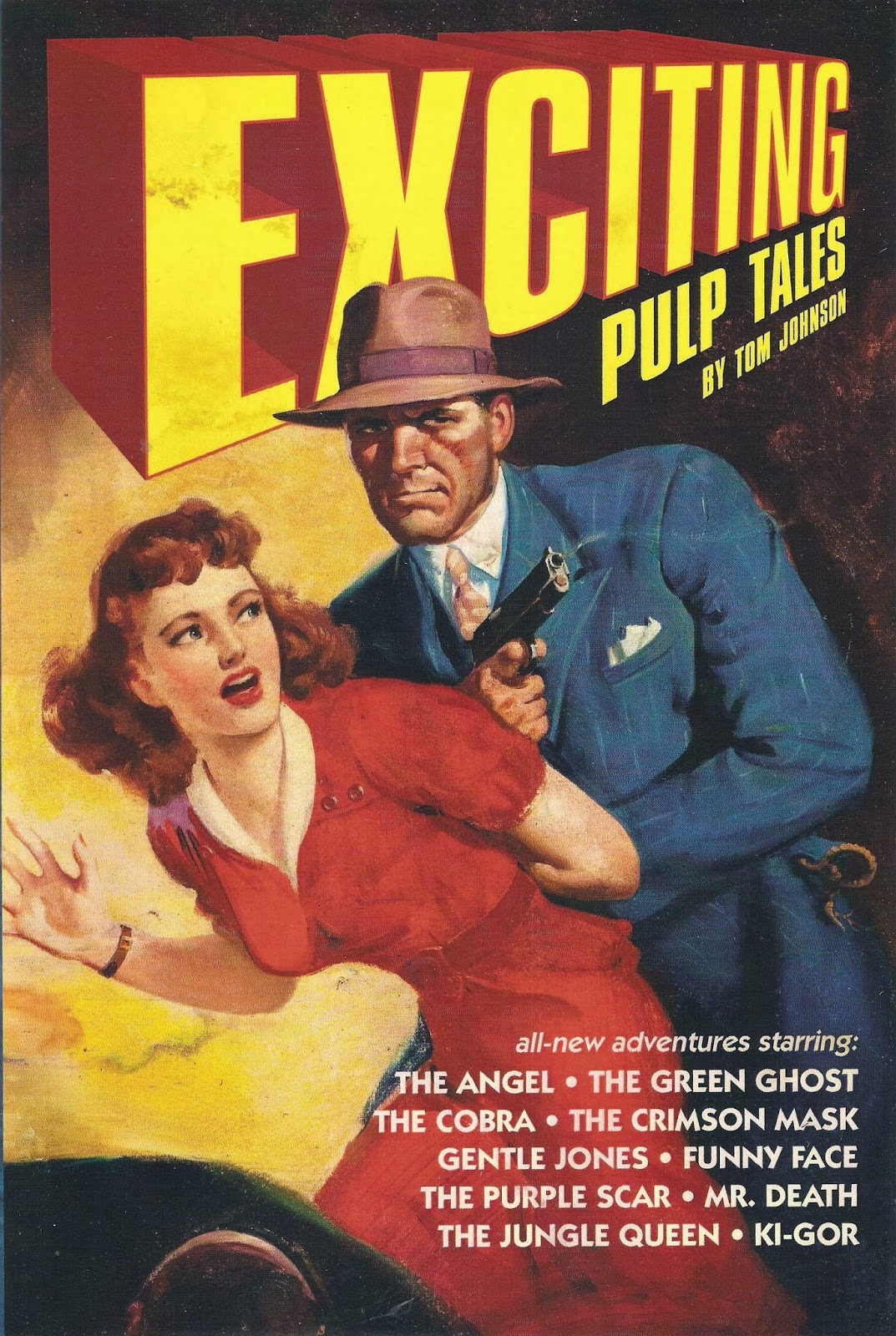 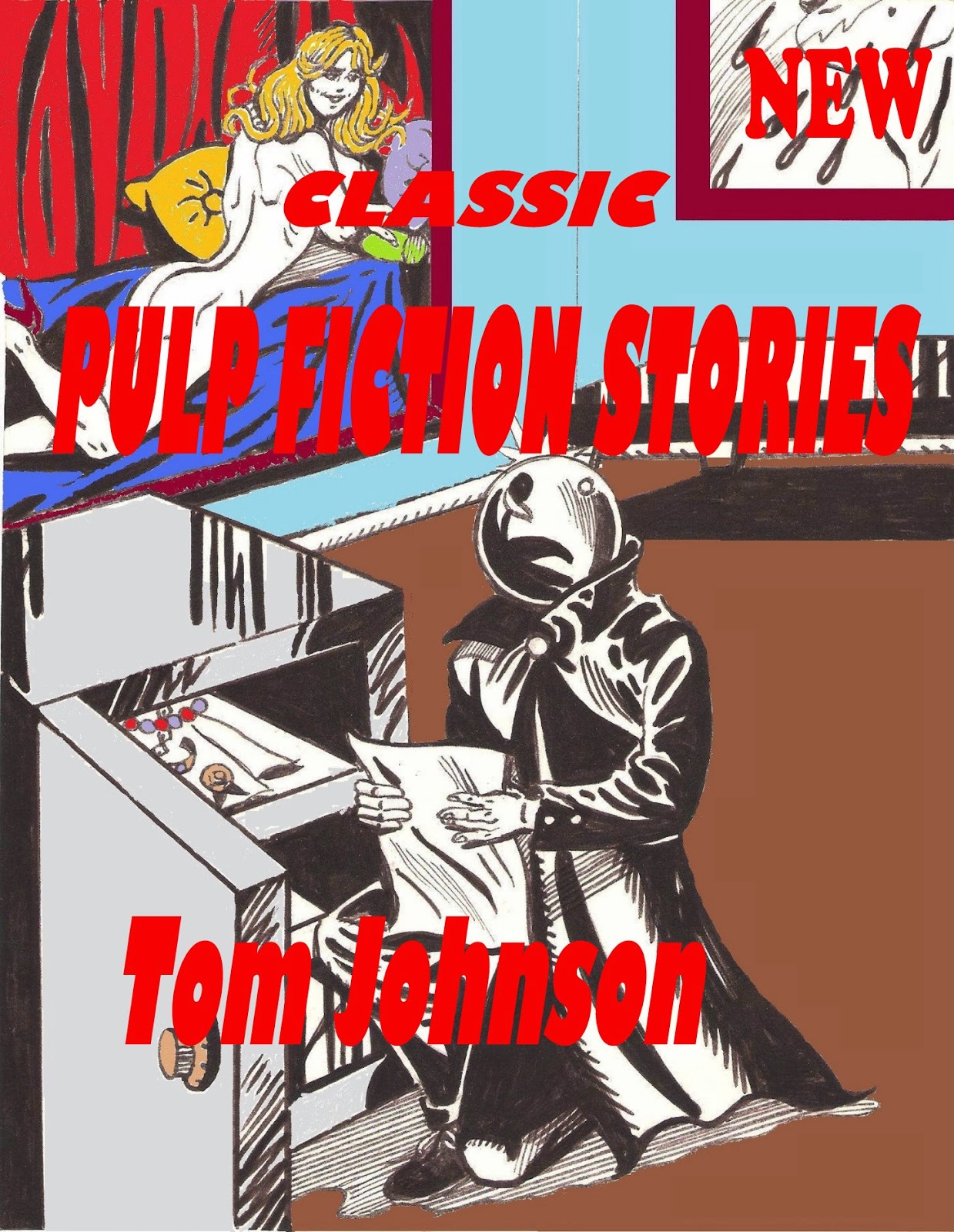 NEW CLASSIC PULP FICTION STORIES by Tom Johnson. Featuring the Moon Man in “Hunter’s Moon”, Secret Agent X in “The Death Tower”, The Man In Purple in “Seven Men of Greed”, Dorus Noel in “The Black Shadow”, and Colonel Jeremiah Custer in “The Silence of Death” (originally written as a Dr. Harker story). 200 pages. $12.00 from the author at fadingshadows40@gmail.com 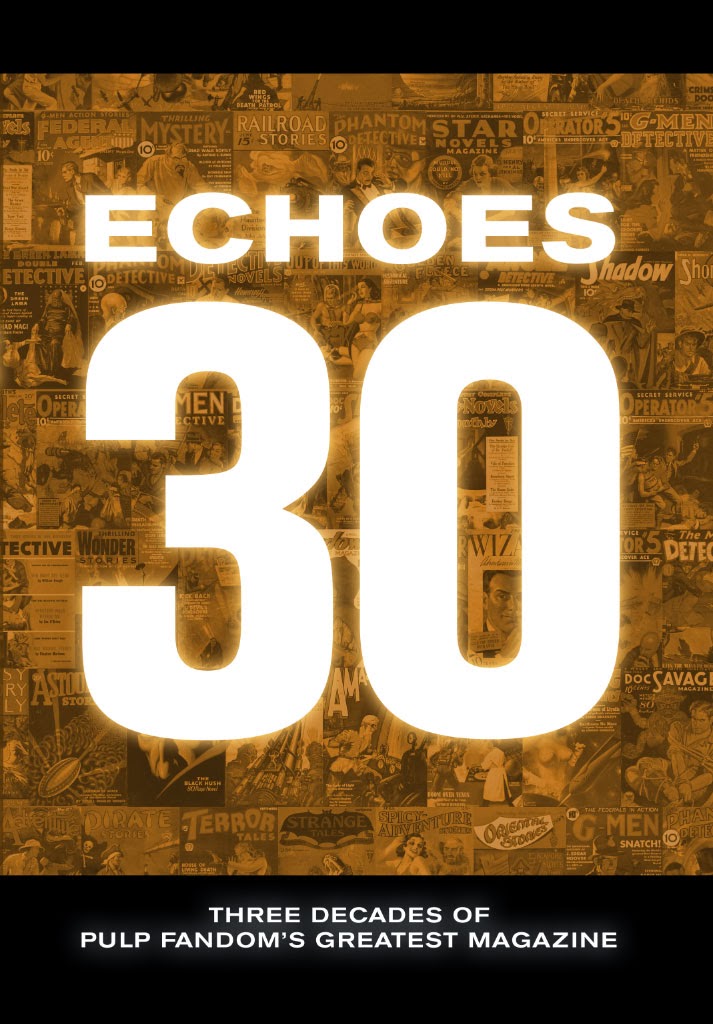 ECHOES 30: From Tom & Ginger Johnson, three decades of Pulp Fandom’s greatest hobby magazine. Echoes is the longest-running pulp fanzine of all time, in print from June 1982 through December 2004. It is back for a special 30th anniversary issue, and it’s the largest single-issue pulp fanzine ever published. Enjoy over 300 pages of articles on pulps as well as a pair of classic reprints, written by pulp experts. The following fiction is included:

A pulp collection for the pulp community, with many photographs of the early pulp researchers and conventions, and filled with scans of your favorite pulp covers, and packaged as only Altus Press can produce them. This 7 x 10 perfect bound book is priced at a mere $24.95.  Available on Altus Press (preferable on Altus Press so we can keep track of early sales) http://www.altuspress.com/ and on Amazon at http://www.amazon.com/gp/product/1618270796/ref=as_li_ss_tl?ie=UTF8&camp=1789&creative=390957&creativeASIN=1618270796&linkCode=as2&tag=altpre-20

Posted by Tom Johnson at 8:42 AM No comments: 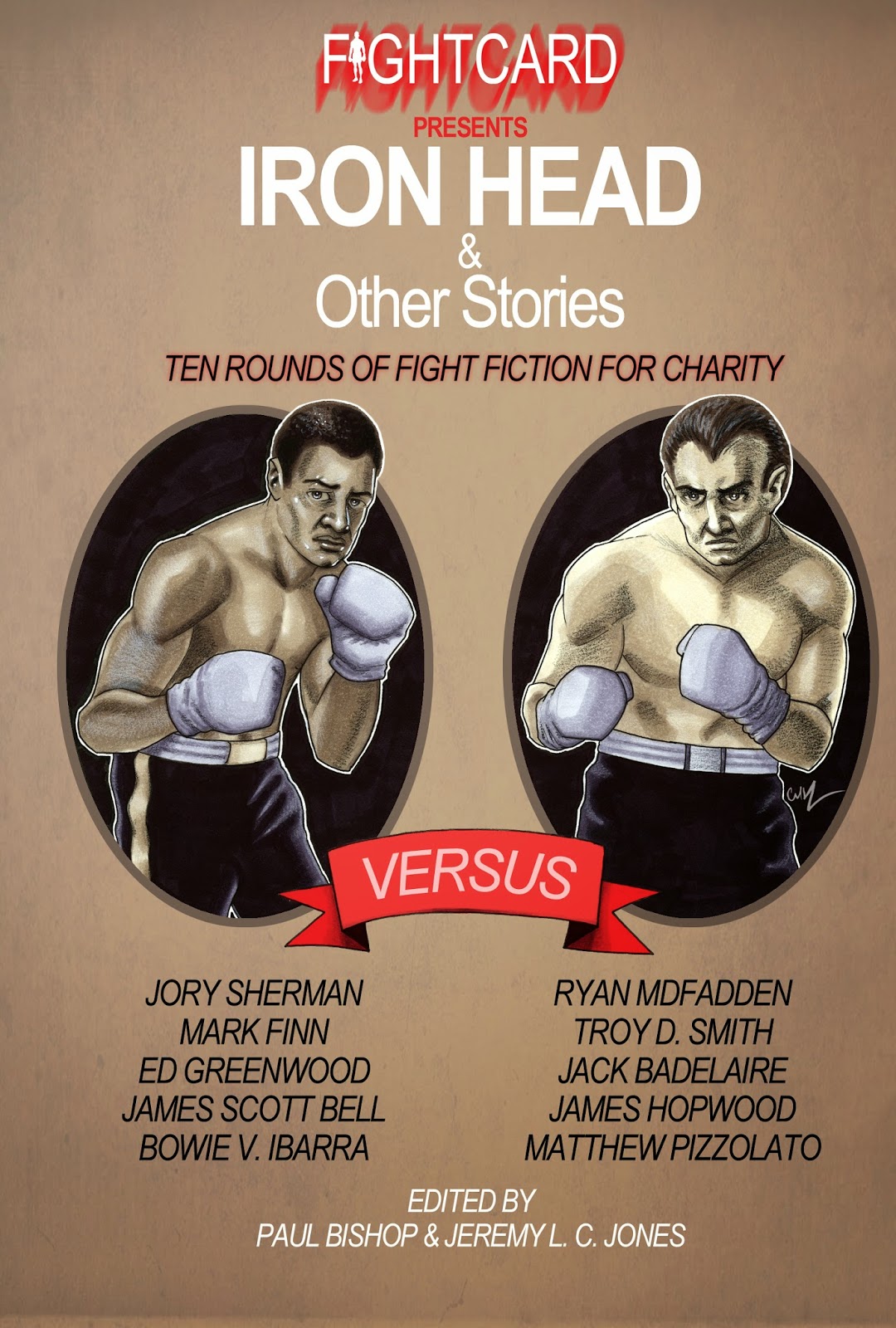 I'm excited to announce the release of our first ever Fight Card CHARITY anthology. Part of our mandate as an author’s cooperative is to give back to our community.  This debut project, Fight Card Presents: Iron Head & Other Stories – Ten Rounds of Fight Fiction for Charity, is the first step.  Three other charity anthologies will follow during the course of 2014.  If you would like to provide a story, please contact either myself or Jeremy L. C. Jones.

One hundred percent of all royalties from these anthologies will go directly to an author-in-need or a literacy charity.  Royalties from our debut charity anthology will go directly to ailing western writer Jory Sherman, who has been financially devastated by related medical bills. Jory is a revered writer known primarily for his award winning westerns, but has also written in many other genres.  Jory has also been a mentor to many other writers.

As always, I have attached a jpeg of the cover and a copy of this current release to read on your computer or send on to your Kindle.  However, as this is a charity anthology, it would also be appropriate to spend $1.99 and buy a copy from Amazon to support Jory.

It is particularly important to help us spread the word about this anthology via your blogs and social networks.  Please help us make a difference two dollars and one punch at a time!

Compiled by Paul Bishop and Jeremy L. C. Jones, 100% of the proceeds from these anthologies will go directly to an author-in-need (in this case, revered western writer Jory Sherman) or a literacy charity. Words on paper are the life blood of a writer.  The writers in this volume were willing to bleed in order to give a transfusion to one of their own – and then continue to bleed to give a transfusion to literacy charities in support of that most precious of commodities ... readers.  They are true fighters, every one ...

Posted by Tom Johnson at 9:53 AM No comments: