The Devil With Wings

Fighter pilot Gary Forsythe is a man on fire.  He’s tough, steely-eyed, hunted by many and feared by all.  He’s British Secret Service—a striking predecessor to James Bond—with a chip on his shoulder and a .50 caliber machinegun in his flying killing machine.  He is The Devil—With Wings.
The Japanese have invaded Manchuria, and Forsythe has made it his mission to stop them.  Japanese Military Intelligence has made it their mission to knock the Devil out of the skies.  But a dogfight with the Imperial Japanese Air Force is child’s play compared to the challenge that awaits him….
Her name is Patricia Weston.  Japanese spies have falsely accused the British pilot of murdering her brother—and now she wants vengeance.  And for once in his life, Forsythe is disarmed—by his love for a woman who has vowed to kill him. 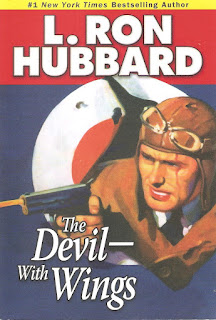 Gary Forsythe is Akuma-no-Hane, the Devil With Wings, and deadly flyer the invading Japanese hate and fear. They have a large price on his head. He appears to be aiding Russia and the Chinese in their fight with the Japanese, but no one knows why, except maybe Ching Tze-Chang, Forsythe’s Yale educated aide. When they learn that Forsythe has been blamed for the murder of an American engineer named Robert Weston, and that his sister, Patricia Weston is in China gunning for Akuma-no-Hane, it’s time for Forsythe to get to the bottom of things – before the girl shoots him by mistake.

This was a fun adventure. Forsythe dresses all in black, except for a silver belt buckle, and wears helmeted-goggles effectively disguising his identity from the Japanese. There is a running confrontation between Forsythe and Captain Ito Shirohari of Japanese Intelligence throughout the story. Of course, Ito wants to kill Forsythe, but never gets the upper hand. Meantime, Forsythe suspects the captain of crimes against the Japanese government, which could cause the little Japanese a lot of trouble with his own people. For adventure and aviation lovers, this is a fine example of the genre, and highly recommended for lovers of a good yarn.


Author of EXCITING PULP TALES
Posted by Tom Johnson at 4:15 AM