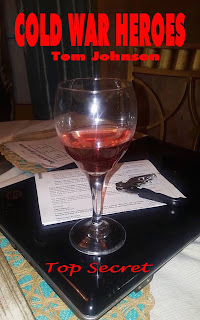 COLD WAR HEROES by Tom Johnson, with a great photo cover by Teena Modgling, is now available through FADING SHADOWS: Top Secret action in this military satire set in Europe during the height of the Cold War. A group of misfit MPs must confront spies and the black market while dealing with a boxing tournament on Post! Not since M*A*S*H* and SOLDIER IN THE RAIN have we been treated to an inside look at military life with a touch of humor by a soldier who actually experienced it.

Loosely based on the author’s memories of Poitiers, France, and the American Army military Post where he served from 1963 to 1966 with the military police. A detachment stuck miles from headquarters, where there was sometimes a lack of military discipline, too much cognac, and some very beautiful French girls. This is available in Hardback from the author for $24.95, and paperback for $13.95, plus postage. It is also available on Kindle for $3.99
Posted by Tom Johnson at 6:17 AM