Vengeance Waits At The Door

A masked hero fights for his life. An ailing reporter faces uncertain death. Will either live until morning?
Following his failed attempt to kill Big Jack, Brent Gregor (aka The Black Spectre) lies near death in a Chinatown parish. Determined to locate the mysterious assassin, the Mob combs the blood-soaked streets to find him. His only hope of survival lies in the mercy of strangers.
Furious that she missed out on the story of a lifetime, Vicky is stunned to learn that her mysterious savior is actually real. Ignoring Editor Frank Matson’s orders and her own failing health, she goes after the story with a vengeance. But to get the answers she so desperately needs, she will have to march straight into the lion’s den. Alone.
Vengeance Waits at the Door is the third book in the Black Spectre Origins series, detailing the rise of the masked pulp hero The Black Spectre. If you like Agent Carter, the Rocketeer, and The Dark Knight, then you’ll love Roger Alford’s gritty noir mystery that effortlessly combines new pulp with a classic 1930s style. 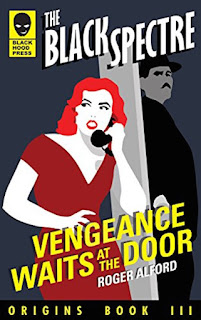 There is a lot going on in this third novel. Death strikes close to several main characters. Vicky’s mother passes away in Gibsonville, MO, while Brent’s grandfather dies in Paris. The Black Spectre, finally recovering from his wounds, reaches mob boss, Big Jack, only to find him already murdered by one of his men. Detective Flynn is murdered by the mob, and Detective Shayne’s family are killed because he spoke out.

Everything is set up for the next novel, and we can only hope it will be out soon. The books are character driven, with small plots surrounding each character. Brent Gregor is finally learning how to use his Black Spectre persona more effectively. Highly recommended.


Author of THE COBRA
Posted by Tom Johnson at 1:54 PM No comments:

The Complete Adventures of Jimmie Dale Volume One

In 1914 a character appeared who would permanently transform popular fiction. Frank Packard's Gray Seal melded elements from A. J. Raffles, Jimmy Valentine, the Scarlet Pimpernel, and Arsène Lupin, but those traits were combined with an entirely new concept: the gifted young man who conceals his identity behind a mask to fight crime in the big city. It had never been done before and it's never stopped being done since. Jimmie Dale, the high society millionaire behind the Gray Seal persona, helped to launch the hero pulp boom of the 1930s and was a direct influence on the Green Hornet, the Spider, the Phantom, and especially The Shadow. The Gray Seal template was adopted by the comic book industry as well, and well into the Twenty-first Century continues to appear there, on television, and in the movies. And now, for the first time ever the complete Jimmie Dale saga is being reprinted in a set of authoritative editions. The personal papers of Gray Seal creator Frank Packard have been consulted for this project, along with various unpublished works of fiction by him that add further insight to the series. Also, a detailed chronology has been established for the novels so they can be considered in their proper historical setting. The definitive Gray Seal collection is finally here, beginning with the novel that forever changed adventure fiction - and the larger world of popular entertainment. 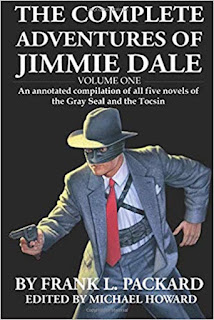 Posted by Tom Johnson at 1:37 PM No comments:

Bones of Brooklyn continues the saga of Howard "Windows" Fenster, the reluctant gangster extraordinaire. In Debasements of Brooklyn, Howie fights his way out of Sheepshead Bay, using insights gleaned from his father's collection of Penguin Classics and an automatic handgun provided by his late boss Vinnie Five-Five. Accompanied by his girl Ariel, they mean to make a brief stop at her studio in Greenwich Village before they escape to points west, north, south or east, anywhere out of the murderous precincts of non-gentrified Brooklyn. But inertia and post-traumatic stress nail them in place. Howie grows a top-knot and finds Bohemian café, while Ariel loses herself in the enticing winter scenes painted inside the Grey Goose bottle. It doesn't take long for Pauli Bones, Howie's psychopathic patron, to track him down. Howie owes Pauli, and Pauli needs Howie because war decimated the old crew and his new crew consists of inept second stringers and unreliable mercenaries. The journey to self-discovery brings Howie to the very point where he started, this time with a new awareness of his powers. Shock and disappointment overwhelm Howie when he learns just how skilled a gangster he is. Pauli Bones, Rose Spoleto (widow of Vinnie Five-Five,) and the Slavic Goddess Alexandra Rachmaninoff all rely on his professional competence to take care of business. Is this it for Howie? Is his dream of living the life of the mind over for good? Can Ariel, whose career in marketing is only tangentially related to extortion and murder, adjust to Howie's new/old life? And if she can, can Howie still love her if he loathes the gangster in himself? The answer to these questions may not satisfy Howie, but they will amuse and horrify everyone else. 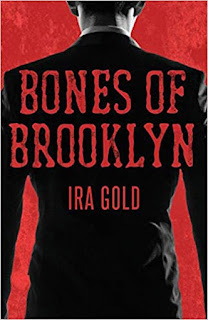 Jewish gangster, Howard Fenster and his girlfriend Ariel, between sexual romps, decide to leave Brooklyn. However, Pauli Bones has other plans for him. Pauli, a mob boss without top men under him, wants Howard to kill Russian, Ivan Rachmaninoff. Howard owes Pauli, but he doesn’t want to kill the Russian.

The publisher sent me a copy for an honest review. I think this novel was supposed to be funny, but I found it anything but comical. The sex and profanity running throughout the story left little time for good world building, and I just couldn’t relate to any of the characters. I’m sure it will bring smiles to many, but I found it crude and of little interest.

Posted by Tom Johnson at 5:47 PM No comments:

No Victory Without Scars

A crusading reporter out to prove her worth. A burgeoning hero in denial about his.
When a Mob Boss is gunned down by police, Daily Crusader reporter Vicky Rose is the only one who suspects he was unarmed. Desperate to justify her promotion to the crime beat, her search for the truth leads her into a cesspool of corruption deeper than she ever imagined.
Brent Gregor, his existence as The Black Spectre still a deeply-held secret, only wants to use his newfound powers to win back what he has lost. And to take revenge on those who took it from him.
Both face unexpected consequences that could cost them their lives. And both have to decide if what they wanted was actually worth the price.
No Victory Without Scars is the second book in the Black Spectre Origins series, detailing the rise of the masked pulp hero The Black Spectre. If you like Agent Carter, the Rocketeer, and The Dark Knight, then you’ll love Roger Alford’s gritty noir mystery that effortlessly combines new pulp with a classic 1930s style. 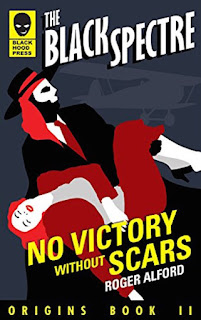 All of the regular players we met in the first novel are back. Brent Gregor goes to California to welcome Abigail’s return from a world event flight only to discover to his sadness that she is now married. Meanwhile, back in Terminal City the mob still rules the city and the police. Upon his return, Brent decides it’s time to stop mob boss, Big Jack Torrisimo, and donning the cloak and hat of The Black Spectre he invades the new nightclub where the mob has gathered. Unfortunately, his automatics are no match for the mob’s machine-guns, and Brent is almost killed in the gun battle. He’s hidden in Chinatown at the end of the story where he remains between life and death. Redheaded reporter, Vicky Rose is forced to work the society page while she recovers from the ordeal at the Asylum, and misses out on the big battle.

This is a fun series, character driven, with lots of mob activity. Our hero, The Black Spectre is still trying to understand his new powers, and how to successfully battle the mob with all their firepower. Highly recommended.

Posted by Tom Johnson at 4:03 PM No comments: