This wildly melodramatic thriller, originally published in the August 1933 issue of DIME MYSTERY MAGAZINE, provided the template for countless pulp-hero novels published during the Thirties. Depression-era readers craved outlandish menaces to take their minds off their troubles, and The Purple Eye was at the top of the list. The Eye, maniacal criminal mastermind and leader of the ancient death cult known as the Brotherhood of Baktuun, terrorizes New York City with a series of high-profile murders accomplished by mysterious means. Seven million souls are at his mercy as his outrages mount in dizzying succession. The police, constrained by legal niceties and endless red tape, seem powerless to thwart his mad schemes. Enter Wayne Saxon, millionaire sportsman and world traveler, who devotes his life to running the Eye to earth. He works within the law when possible, but without it when necessary. Will he succeed? There's a thrill on every page of this baffling mystery. 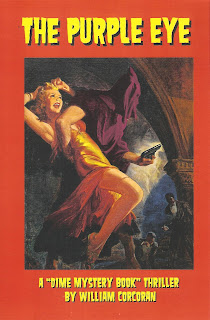 Millionaire Wayne Saxon has been away from New York for some time, on a mysterious trip overseas. Upon his return he finds a visitor wishing to see him before he can unpack. Young David Storm, the son of an old enemy, seeks his help. A new menace has risen in Saxon’s absence, known as The Purple Eye. And David’s girlfriend, Dolores has been threatened.

Saxon entertains the couple, and promises protection while he investigates The Purple Eye. With his manservant, the huge black man named Christophe, Saxon is quickly thrown against the minions of The Purple Eye. There is also the mysterious Secret Hundred, a group of cab drivers, who may also be fighting The Purple Eye, and interferes with Saxon. This group is led by Martha Considine, the widow of Big Mike Considine, a murder victim of The Purple Eye. But Saxon and The Secret Hundred don’t immediately see eye-to-eye, and are at cross-purposes.

Typical of early pulp stories, the villain isn’t difficult to unmask by the reader very early on, but it’s all about the hero working his way to the end of the story and finding all the answers. Although a topnotch story, I thought Saxon was a little weak as a hero, and was more impressed with Martha Considine and The Secret Hundred. Imagine a team of taxi drivers fighting crime, led by a fascinating beautiful woman? We also see a black man as the hero’s aide, though there is a bit of racial stereotyping in the story, which is also typical of the time period. Still, for a quick, fun read, I highly recommend this book for readers who like a good yarn in the old style of pulp thrills.