One of the most popular titles of its day, TRIPLE DETECTIVE carried some terrific stories. The magazine was so popular that it lasted long after most titles had folded, continuing until the Fall 1955 issue. Some interesting stories ended up in the later issues after the other titles ceased. Unfortunately, many of the later issues contained reprints of earlier published stories. TRIPLE DETECTIVE is being published in the pulp format of old, and for the pulp collector, and fan of the character pulps, this will quickly become a collector’s item in itself. Available from Altus Press & Amazon. 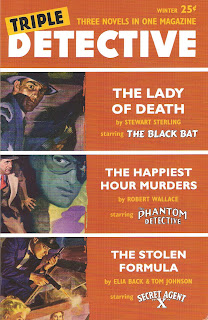 #1, 2007, $14.95: With the release of the new series from Altus Press, three important stories are included in the first issue for the pulp fan.

THE HAPPIEST HOUR MURDERS by Norman Daniels was written as a Phantom Detective entry in 1934, but rejected, and published later with all reference to the Phantom removed from the story. Restored by Tom Johnson.

THE LADY OF DEATH by Stewart Sterling was originally written as a Black Bat, but left unpublished, and appeared later, with all traces of the Black Bat removed. Restored by Tom Johnson.

THE STOLEN FORMULA by Elia Back (Secret Agent X) was published in Greece in 1950. This is its first American publication in English. Translated by Dimitry Hanos, and heavily edited by Tom Johnson. 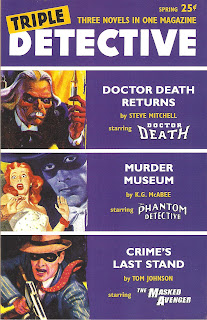 #2, 2008, $14.95: DOCTOR DEATH RETURNS by Steve Mitchell: Twenty years before, a sinister madman held the world at bay, using the twin powers of science and sorcery to unleash a crimson tide of murder and destruction that swept across America and Asia. Then he disappeared—leaving no clue to his final fate.

MURDER MUSEUM by K.G. McAbee: The Phantom Detective, that nemesis of all evildoers in New York City, takes on the uncanny powers of the sinister Dr. Darkness!

CRIME'S LAST STAND by Tom Johnson: Will evil win out? Can even The Great Masked Avenger survive the final battle with the city's underworld when crime makes its last stand! 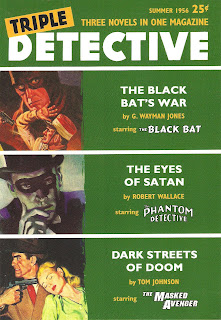 #3, 2009, $14.95: THE BLACK BAT'S WAR by G. Wayman Jones In the trenches of war-torn Germany, soldiers were dying from the medicines they were receiving for their wounds. The Army generals blamed America for the bad drugs, yet nothing could be done until the source of the deadly medicines could be uncovered and replaced with new drugs. While investigators were stymied, The Black Bat and his team of crime fighters took up the challenge, uncovering a giant plot by a master criminal. But would he be in time to save brave young soldiers dying of their wounds in a far off No-Man’s Land?

THE EYES OF SATAN by Robert Wallace: From war-torn Europe comes a mastermind with plans to unite all the mobs under his leadership, but while he is making future plans, a small-time thief murders his young bride, calling for vengeance first. That vengeance results in the death of three people, the small time thief, a respected jewel dealer, and a city cop. Those murders bring in the underworld’s dreaded nemesis, The Phantom Detective. But when the lovely Muriel Havens, daughter of the Phantom’s only contact, Frank Havens, is kidnapped, can even the master detective run down the killer before death strikes again?

DARK STREETS OF DOOM by Tom Johnson: Dark Streets That Lead To Ebony Alleys In The City’s Immigrant District Culminate In A Spider’s Web of Fear When Homeless Children Are Abducted By Emissaries Of Evil. When The Masked Avenger Promises Protection To The City’s Unwanted Children, Can He Keep That Promise? 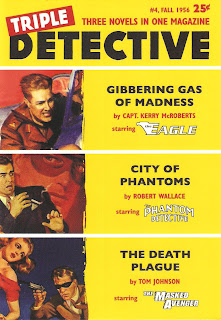 #4, 2009, $14.95: THE GIBBERING GAS OF MADNESS by Capt. Kerry McRoberts. When Scientist working on military weapons mysteriously go mad, The U.S. Government fears a foreign power at the source of the evil and G-2 calls in their top secret agent, The Eagle. But this time his foe may be the greatest spy in the world – And the most beautiful. Will Jeff Shannon also fall victim to her womanly charms?

CITY OF PHANTOMS by Robert Wallace. When an old case resurfaces, The World’s Greatest Detective is pulled back into a new battle with a deadly enemy, while ex-Fighting District Attorney Tony Quinn’s lovely secretary, Carol Baldwin is kidnapped by a vicious mob, hoping to force the prosecution to drop it’s case against their Boss. Two champions of Justice meet in a race against time!

PLAGUE OF DEATH by Tom Johnson. A German scientist has brought a virus to America to aid in the Brown Shirts taking control of the United States for Hitler. To test the virus, the scientist releases it on a Chicago orphanage, killing all but one child. The Masked Avenger puts the child, a young Korean boy, under his protection, while a Chicago policeman and young Korean woman also watch over him. But when the boy is kidnapped, the trail leads the Masked Avenger to New York, where he must uncover the German scientist and stop the virus from killing everyone in the great city. A wild ride, as the German mob and Brown Shirts combine to bring America to its knees while Hitler concentrates his army on Europe! Can one man, even such as the Masked Avenger, succeed when America looks to be doomed?

An additional surprise is in store for the readers with THE LEGEND by Tom Johnson. In this short story, The Legend returns to bring justice to an old hoodlum! This giant issue also contains a Phantom Detective comic not reprinted in THE PHANTOM DETECTIVE COMPANION.
Posted by Tom Johnson at 8:24 AM