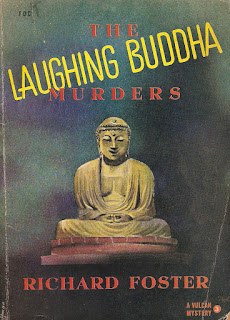 The Laughing Buddha Murders by Richard Foster.
The Laughing Buddha couldn’t just have walked away. Statues haven’t been known to walk since Pygmalion brought Galatea to life. But this was only one of the problems facing police after the death of the ruthless millionaire art-fancier and political tyrant who had but one friend in the world. Another problem was the entrance into the case of Chin Kham, good-looking young Tibetan scholar, who seemed to know more than he should about what was going on. It’s a particular engrossing story with Chin himself providing unique interest – and a delightful surprise ending!
When I learned about this book some twenty years ago, I thought it sounded very much like a possible Green Lama story, but the plot was not one of the published stories in the series. So for years I meant to find a copy in hopes of discovering either an unpublished Green Lama story, or maybe a story based on an unfinished story when the series ended.
Unfortunately, this appears to be a stand-alone story, though the author does reach back to his Green Lama days for the tale. Chin Kham is a Buddhist Lama, though he was born in America, he studied here and in Tibet, and was an expert on Tibetan history and relics. There is one Om! Ma-Ni Pad-Me Hum!” in the story, and remember Dr. Pali, well we do have the Pali language mentioned. Chin walks around quoting Tibetan proverbs, and sounds a lot like Charlie Chan. His assistant, Kay Barrett, is a smartly dressed young woman with dark red hair. Her dress clung fondly to the curves of her body. Hers was the sparkling beauty that made men look twice and then feel the surge of Spring in their veins. She is supposed to be Chin’s Public Relations Council. She is also very feisty, and brings some humor to the story. Chin never wears the robes of a Lama, preferring American suits. The story takes place in Cleveland, where Chin is scheduled to lecture at a university on Tibetan lore.
Since most of you will never read this wonderful little entry, I will reveal some facts, though not divulge the whole mystery. Chin Kham and Kay Barrett are not what they seem. They actually run a private detective agency in New York City, though Chin is truly a Lama, and descendant of the Tashi Lama. They use the Lecture Tour as a cover when investigating cases out of town or state. A client had hired them for a purpose to come to Cleveland, where the case quickly turns into a murder and the mystery of a two thousand pound statue appears to have disappeared from a collector’s study. Although not a lot of action, there is a good mystery and some pleasant humor that moves the story smoothly to a surprising end. I thought it read better than the Green Lama series, but I’m not sure a second story would work since the reader now knows who Chin and Kay are. It is certainly a lost piece of treasure that would be a great book for one of the current publishers to reprint. (I recently learned that a second story has been found, and it appears to be the only sequel. Plans are currently in the works to reprint them!)