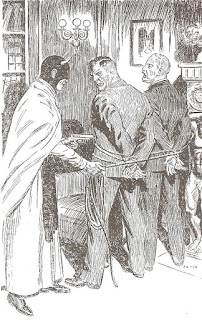 Johnston McCulley’s The Rollicking Rogue was another of his fascinating costumed characters that predated the explosion of the so-called pulp heroes in the 1930s, with the likes of The Shadow, Phantom Detective, Spider, etc. The first story appears to be “The Rollicking Rogue” in the November 1930 issue of All Star Detective Stories, which also sports a great cover featuring the character from a scene in the adventure. 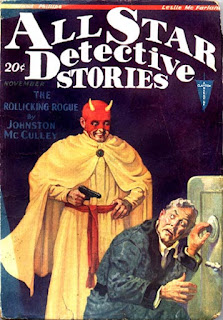 The Rollicking Rogue had a neat costume, unlike most of McCulley’s simple hood affairs. He wears a yellow robe and cape, with a red sash, and a red helmet with yellow horns, depicting a devil image. Not only that, but he has a weird laugh to taunt his victim, a la The Shadow, but predating him by several months.
As with many of McCulley’s characters, The Rollicking Rogue also inspired the future Captain Satan series in 1938. Not surprising, since many of his creations inspired others. However, the costume was not unique, even for All Star Detective Stories. The October 1929 cover sported a similar character, but all in red. 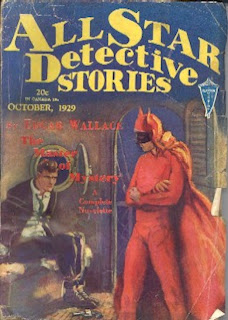 Typical of McCulley’s characters, there is the Clark Kent/Superman alter ego at work. The hero, The Rollicking Rogue is tough, fearless, and quite capable. When not in costume, he is a mild mannered secretary, and coward, named James Peters (not his true name we’re told).
The plot is also a simple one well used in the pulps. Ten years previous, a group of financiers and businessmen broke smaller businesses, leaving families destitute. The Rollicking Rogue is the son of one of those families. His sister and mother did not survive, and he’s out to get revenge on those crooked men.
McCulley also had a western character using this name, but I don’t know how similar to the one in All Star Detective Stories he is. I’m not sure how many stories featured this interesting character, but I liked him. If anyone is interested, Matt Moring recently included two of the stories in with the volume of The Swift Revenge of The Green Ghost. Don’t miss these fascinating pulp tales!
Posted by Tom Johnson at 5:53 AM