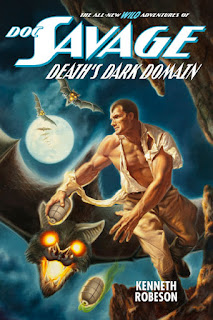 When Pat Savage receives a strange package, it sends Doc, Monk and Ham off to Europe where war drums are sounding between Tazan and Egallan. Long Tom has already departed by ship. It seems John Sunlight had sold super weapons from Doc’s Fortress of Solitude to the two warring neighbors. Doc wants the deadly weapons back, but complicating the situation is the terror-field area between the countries, called Ultra-Stygia.

Hold on to your hat. Things are going to get wild. Just in time for Halloween, Will Murray takes Doc Savage where Lester Dent could never take him. In a land seeming to be infested with vampires and werewolves, you can add invisible Cyclopes to the mix for more fun. A deadly spore may have infected poor Pat, so she is left behind in the care of doctors.

In this latest Doc Savage adventure, Will Murray proves once again that he is the rightful successor to the character. Doc and his aides are in top form, and the story moves full steam ahead without let-up. As much as I loved the previous entries, Death’s Dark Domain out does them all in fantastic adventure, and the man of bronze tackles the action head-on in a non-stop thrill-a-minute read.  The book production and design by Altus Press, along with the new cover by Joe DiVito makes this book a gorgeous keepsake.