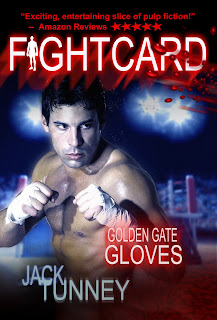 The San Francisco docks in 1951. Conall O’Quinn is dock champion, but for some unknown reason his boss wants him to lose. They bring in the Union boss’s son to beat him, but when O’Quinn still wins against loaded gloves, he is accused of having the metal in his gloves and fired. He and his old friend, Benson leave, but they want to know why they were fired. Breaking into the warehouse that night, they discover a treasure map in the company safe, but someone sets fire to the warehouse and they have to get out. Now they are being blamed for the fire, and figure it’s too hot to stay in town. They follow the treasure map to the Sierra Nevada Mountains, and a little town named Jamestown where the abandoned mine with the treasure is supposed to be. More trouble. An old man and his beautiful daughter, Maggie, own the mine. But the father has bet his boxer against another mine owner’s boxer, and may lose the mine. Things get even worse when the mob runs them down in Jamestown, and forces them back to San Francisco for a final match with the Union Boss’s son.

This is a busy story, but has some great boxing highlights. Although I was left a little confused why the warehouse was burned down, it was a good plot overall. These Fight Card novellas are filled with men and women strong on moral responsibilities, and though things may look pretty bad for the protagonists we know that good will always triumph over evil in the end.
Posted by Tom Johnson at 8:49 AM