The Day I Fought Frankenstein 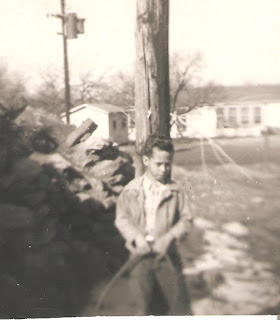 Over the next few days I will be posting some of my childhood memories. In the above picture the Boys Club is in the background.
Tom

It’s odd how something insignificant can force your mind to wander into the past on occasion. Recently, while taking my wife to the hospital in Wichita Falls in preparation for surgery, a loud voice drew my attention to a gentleman my age in a wheelchair. He was instructing a person where to push him. The man’s voice, and his features triggered something in my brain, and I was again on the San Jacinto elementary school grounds.
Our memories of childhood often reflect on some of the more frightening moments. Though we try to recall the good times, like first date, first kiss, or even that first bicycle. At times other things are brought to mind that may not be all that pleasant. My childhood was filled with many such unpleasant memories.
I attended San Jacinto elementary school in Wichita Falls between 1947 and 1953; sometime around 1951, when I was eleven, we had a boy in school that was much taller than the rest of us. Being bigger, he tended to be a bully, and pushed the rest of us around on the playground. So we knew to stay out of his way. This kid always acted like he was the Frankenstein monster, walking stiff-legged, with his arms outstretched as if to grab one of us. He took pleasure in seeing us scatter. One day he even stuck something that looked like bolts on both sides of his neck! He was his own Frankenstein monster.
I had a good friend I’d known about four years, since we moved to Wichita Falls. He was a little bit fat, and maybe somewhat awkward, but he was my buddy. It all started at recess one day, when something happened – I don’t know what – but suddenly the kid we called Frankenstein jumped on my pal and was hitting him. Sometimes I do things without thinking. I jumped on the monster!
We had just started swinging when the bell rang, calling an end to recess. We headed for the school building. Frankenstein threatened, “I’ll see you after school!”
I said something like, “Good!”
Unfortunately, I had the rest of the day to think about what this monster was going to do to me after school. It wasn’t a good thought. He would look at me from across the classroom, and snarl.
Time cannot be halted, however, and eventually the bell ending the day finally sounded, and I knew it was time for me to die. Frankenstein was going to kill me. But instead of running home like a sane person, I stopped outside the door and waited for the inevitable. Maybe I had a slim chance, I thought. My heavyset pal was nowhere to be seen, he was smart and got away from school quickly. He wasn’t about to wait around for the monster to tear me from limb to limb, and then start on him!
Well, I waited, and I waited. Just about all of the kids had left the building, and was headed home, only a few stragglers remained. The longer I waited the braver I got. Frankenstein is scared of me! I thought. Well, it was worth thinking anyway.  Just as I was sure the last kid had left the building, a boy came out who remembered about the fight.
“Hey, Frankenstein is waiting for you on the north side of the building!” he yells. “I’ll go get him!”
The north side of the building! Of course, the San Jacinto school building was built in a square, with four sides, four exits! While I had been waiting on the west side, the monster was waiting for me on the north side of the building.
Thankfully, I didn’t have much time to think about my predicament. In no time at all, Frankenstein came running around the building anxious to dismember me. I don’t know who threw the first punch, but we were quickly swinging meaningful headshots; we weren’t skilled fighters, as you can imagine. But I was giving as good as I was getting, and the monster was starting to cry. Maybe I was too. But we kept on throwing those headshots with hard knuckles, and neither of us had gone down.
Suddenly, someone yelled, “The principal is coming.” That ended the fight. Everyone scattered, included Frankenstein. I raced for home also.
I don’t remember if I worried about the monster that night, or not. But the next day school was normal. Frankenstein didn’t approach me. In fact, he never bothered my buddy or me again. Like all bullies, once someone stands up to them, they become less aggressive. But it wasn’t bravery on my part believe me. I had merely acted instinctively, without thinking. If I had had a second to stop and think, I would never have jumped on the Frankenstein monster that day!

There is something of an addendum to this story. In 5th Grade art class one day, our teacher gave us an afternoon assignment. Each of us was to draw a self-portrait of what we wanted to be as an adult. After we finished, she picked up the drawings and glanced through them, and then selected mine and Frankenstein’s to hold up in front of the class. I had drawn a sheriff with a badge on his chest, and Frankenstein had drawn jail bars with him looking out. What she said kind of chilled me. She said, “What you have seen is these drawing is what you will become.”
I didn’t become a sheriff, though I did become a cop for twenty years. I wonder if Frankenstein ended up behind bars? I don’t remember his name, except for what we called him, nor did I ever see him again after leaving San Jacinto school. There were other fights, some even more memorable than the day I fought Frankenstein, but few that I remember as vividly.
Was the old man in the wheelchair my Frankenstein monster? I don’t know. I would have felt foolish going up and asking him. From the wheelchair, he posed no threat today, if he was. I’m sure he would have had many fights over the years, so our little encounter at age eleven would not have been something he was likely to recall. I merely watched him a while and remembered other times in my childhood with fonder memories.
Posted by Tom Johnson at 6:46 AM