Ben Casey, a fired crime reporter, stumbles upon the story of a life time. A story that illuminates who is responsible for all the evil acts that take place in the world. He discovers a conspiracy that puts his life in jeopardy, but he is determined to see it to the end and write his story.
Making an appearance in this story is private dick, Harvey Valentine, who helps Ben Casey reach his destination and get his story.
No one is above THE SECRET CABAL. 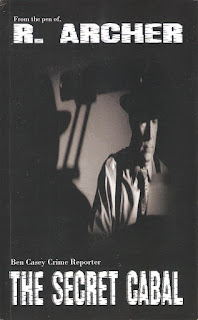 Fired from his newspaper job, Casey is looking for something to do when he chances upon a drunk in a bar hitting strangers up for drinks by telling them a weird story about his downfall from politics by a secret organization once known as the Illuminati, now calling themselves the Secret Cabal. Since this looks like a story Casey might sell to another newspaper he buys the man drinks and gets leads that he can follow up on.

The trail leads Casey to an island where he finds an underground complex with a mystifying entrance. Finding the mysterious bunker empty, he leaves, but spots a black helicopter en route to the island as he departs. The chopper was unmarked. Did they see him? Deciding he needs help collaborating his story he brings in private detective Harvey Valentine. Casey takes Valentine to the island, but they now find the compound occupied – by armed men dressed as clowns.

This was a fun story, as only R. Archer can spin a tale. Although there were some editing problems, my only complaint is a personal one. I wish the author would tone down the profanity a bit. I’ve always thought an author was a master of words, not mastered by them. I appreciate good dialogue, and an overuse of profanity will ruin the dialogue for me. I view profanity as a weakness, and I want strong dialogue between the characters. Hardboiled fiction refers to tough detectives with a rough attitude towards the establishment, but the original writers could show that toughness in words other than profanity. But for the fun of the story, and as an admirer of the author’s work, I highly recommend this for the hardboiled fiction lovers.


Author of CARNIVAL OF DEATH
Posted by Tom Johnson at 6:00 AM