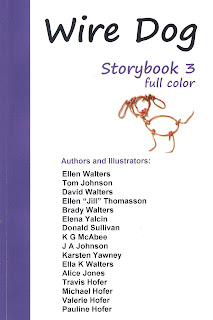 Created by 9-year old Ellen Walters when her parents wouldn’t let her have a real dog, and she built one out of wire. Her imaginary friend then went on to have many great adventures, which she told her parents. Her dad, David Walters, was so thrilled with the concept, he asked her to write them down. On Father’s Day, she did just that, and the stories have now reached 42, and going strong.

These stories are intended for pre-teen school children, but fun for adults, no matter what age. Most have a moral to teach to children through the eyes of Wire Dog. The main goal is to get the books in classrooms and homes to be read to children, and hopefully inspire them to write and illustrate their very own Wire Dog adventures. Currently, the books are half price on Lulu and should be on Amazon soon. I recommend the color edition, but either is a wonderful book. This is highly recommended to parents, and I hope that everyone will help to spread the word.


Author of PANGAEA: EDEN’S PLANET
Posted by Tom Johnson at 6:25 AM