In recognition for his role in solving the Japantown murders in San Francisco, antiques dealer and sometime-PI Jim Brodie has just been brought on as the liaison for the mayor’s new Pacific Rim Friendship Program. Brodie in turn recruits his friend, the renowned Japanese artist Ken Nobuki, and after a promising meeting with city officials and a picture-perfect photo op, Brodie and Nobuki leave City Hall for a waiting limo.
But as soon as they exit the building, a sniper attacks them from the roof of the Asian Art Museum. Quick thinking allows Brodie to escape, but Nobuki ends up hospitalized and in a coma. Brodie soon realizes that, with the suspicious and untimely death of Nobuki’s oldest son a week earlier in Napa Valley, someone may be targeting his friend’s family—and killing them off one by one.
Suspects are nearly too numerous to name—and could be in the United States or anywhere along the Pacific Rim. The quest for answers takes Brodie from his beloved San Francisco to Washington, DC, in a confrontation with the DHS, the CIA, and the FBI; then on to Tokyo, Kyoto, and beyond, in search of what his Japanese sources tell him is a legendary killer in both senses of the word—said to be more rumor than real, but deadlier than anything else they’ve ever encountered if the whispers are true. 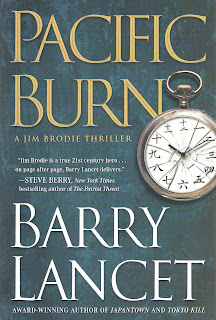 A murder in Napa Valley brings Jim Brodie into the case. Brodie, a dealer of Japanese and oriental objects de art, is an expert on Japanese language and culture. The Napa Valley murder involved a Japanese male, and his son was a witness, and the police need Brodie’s help in translating. The murder may also tie in with the mayor’s wishes to unite his city with the Pacific Rim Friendship program. In fact, the father of the Napa Valley dead man is shot on the City Hall steps, and might die from the wound.

Brodie is pulled even deeper into the case when the Nobuki daughter is also targeted, and government agents of the CIA, FBI, and DHS try to derail him and arrest the Japanese girl. The case has deeper significance as an assassin called the Steam Walker is hired to kill the Nobuki family and Jim Brodie. So far, the assassin hasn’t failed in a mission, and his martial arts skills are far beyond that of Jim Brodie.

This was another fast paced action thriller that takes place in America and Japan. The writing is smooth, and the characters come alive. The plot has many twists, until the mastermind behind the assassin is finally uncovered, and the assassin unmasked. This is topnotch story telling from the first page to the last. Highly recommended for thriller and action lovers.


Author of THE PULP DETECTIVES
Posted by Tom Johnson at 3:36 PM