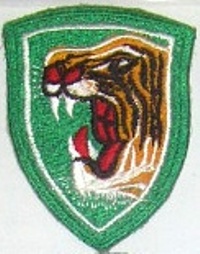 During America’s involvement in Vietnam, we often forget that the soldiers of other countries fought along side of us. I spent a year in Vietnam, serving in two areas, Nha Trang and Bien Hoa. As an MP, we had many occasions to interact with our brothers in arms, the ROK (Republic of Korea) units. These were brave fighting men, who performed their duty with heroism and the ultimate sacrifice. It’s time we acknowledged their contribution to the war against communism. In 1959 and ’60, I was a young soldier assigned to the 1st Cavalry on the DMZ, where we patrolled the border with Korean soldiers. Even then we were still under fire, and the Korean soldiers distinguished themselves with high honors. Over the next few days, I will be posting the ROK Patches of the units that served in Vietnam alongside our American troops. Let’s remember to acknowledge and honor our Korean brothers in arms. The Korean DMZ Group is at  http://groups.yahoo.com/group/Korean_DMZ/?yguid=321995096
Posted by Tom Johnson at 5:41 AM