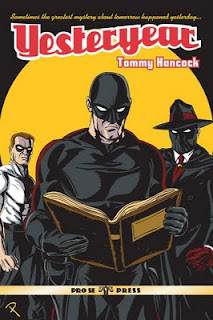 By Tommy Hancock
CreateSpace (Pro Se Productions)
ISBN #978-1461061595
Price: $12.00
190 Pages
Rating: 4 Stars
The story begins in the 1950s, when Kid Detective, J.C. Smithenson discovers a clue to a missing book, written by Ramsey Long, detailing the private lives of the Golden Age Super Heroes. But shortly after the rumored book was written, Ramsey Long and the book had disappeared. Now jump forward to the current period, and mysteriously a package is left for a much older Smithenson, who now publishes a city newspaper. In it, he finds the mysterious manuscript of Ramsey Long.
As J. C. Smithenson discovers information long kept secret, several groups – including the government – wants the manuscript destroyed before it’s made public. Modern Super Heroes are suddenly being murdered, and we find that our Golden Age Super Heroes may not have been perfect.
I don’t want to give away any more of the plot, as the reader will want to discover the secrets behind “Yesteryear” as it plays out. I enjoyed the author’s writing, which is filled with adjectives, adverbs, and clichés. This is what I miss about modern books. Professional editors tend to toss every extra word they see from a sentence. But Tommy Hancock has recaptured the old form of writing very well. I have not read comic books in thirty years, and for a reason. During the Golden Age, we were given heroes when we needed them, and they were pure and All-American. So I’m not a fan of flawed heroes. The format of the pdf I read had many problems also. I’m not sure if the printed book contains these mistakes, but the problems in the pdf were quite a bit distracting. Paragraphs would quit suddenly, then continue as the next paragraph. There were a few wrong words, but these were minor and acceptable.
For comic book fans, this is an excellent prose book. For the dedicated pulp fan, unless they want heroes who can fly, I think they’ll be disappointed in the concept of “Yesteryear”. However, for a great, entertaining read, I do highly recommend this book.
Posted by Tom Johnson at 11:19 AM