Glare of The Gorgon

Why did a desperate man shave his head before visiting Doc Savage headquarters, only to be struck down, his pulsing brain turned to inert stone? What sinister secret did his strange slaying silence? And how was a lizard-green shadow resembling Medusa branded on Doc’s office wall?
These are only some of the questions confronting the Man of Bronze as he pursues a grisly trail of petrified corpses to post-Prohibition Chicago, whose criminal underworld is being terrorized by a serpent-haired demon engaged in a seemingly senseless slaughter spree whose ultimate target will shake Doc Savage’s men to their core.
Suspects are many, clues baffling. Death and danger lurks everywhere they turn––symbolized by the silhouette of a faceless Gorgon.
From the concrete canyons of Manhattan to the coal fields of Illinois, Doc Savage tracks a phantom fiend the likes of which he has never before hunted. Or is he the one being hunted? 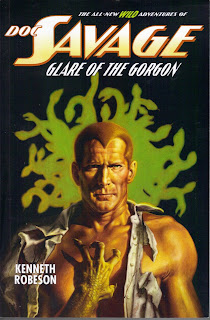 Ned Gamble contacts Doc Savage from the train he’s arriving on from Chicago, to expect him. But he’s being followed, and before he reaches the safety of Doc’s headquarters, he is killed in the hallway and an odd green figure is found on the wall where he died. When Doc examines him, he finds the man’s brain calcified. Ned is carrying a newspaper with an article covering the death of a scientist in Chicago that appears to have a bearing on the case. At present, Long Tom Roberts is attending the Chicago Exposition of Science, and Doc notifies him to contact Janet Falcon, the last person Ned Gamble was in contact with. Finding the girl is easy, but Long Tom is quickly captured, and the case is running full steam with the Greek mythical Gorgons playing a hideous death note. The story quickly moves to Chicago where the Exposition becomes a backdrop for some of the action.

Although the cover isn’t one of my favorites, the author’s writing continues to mesmerize the reader from the first page onward. The writing is smooth, the plot fast-paced, and the adventure is filled with thrills. Doc’s aides, the five greatest minds in the world – next to Doc – have to be shown a little dumb in order for Doc to appear so smart, but these longer stories tend to make them even dumber than they would normally seem in a pulp-size adventure of 120 pages. In this novel we see that clearly. Not that it distracts from the novel, I just feel the author should give them a little more intelligence in these longer tomes. However, the author has another winner on his hands. Highly recommended to Doc Savage fans, as well as adventure lovers around the world.


Author of CARNIVAL OF DEATH
Posted by Tom Johnson at 5:33 PM