The City Burns At Night

She was just like a high-speed drive down Mulholland. Dangerous and full of curves!
Home from the War, hotshot reporter Tom Miller trades the frigid battlefields of Northern France for the warm sunshine and bright lights of Hollywood. Now dusting a chair at the Los Angeles Chronicle, Miller is looking to make his bones. He gets his chance after risking life and limb to rescue two endangered tykes from a brownstone inferno.
This not only gets him on the front page of every paper in town, but hot on the trail of a mysterious firebug who’s loose in the City of Angels. Plus an invitation to a Tinseltown soirée at his publisher’s oceanfront Malibu mansion.
After regaling the assembled glitterati with a dramatic recount of his heroics, Miller enters the orbit of two beautiful women who will forever change his life.
Trudy Wilkes is a young ingenue looking to make her Hollywood dreams of stardom come true. Miller is taken both by her innocence and her vast industry knowledge. She could be just what he needs to build a new future.
But then there's Irene Faye. A sizzling, blonde bombshell who’s career has been on the skids since separating from her studio honcho husband. Miller is just as drawn to her. But for completely different reasons.
As he works overtime to track down the arsonist and break the story wide open, Miller finds that Irene may actually be the key to the whole mystery. As he’s continually pulled deeper into her inescapable orbit, he risks both his job and his future with Trudy in his search for the truth.
And maybe even his life.
The City Burns at Night is the first book in the Hollywood Newshawk series, detailing the exploits of Tom Miller, hardboiled reporter in 1940s Los Angeles. If you like L.A. Confidential, The Black Dahlia, and Philip Marlowe, then you’ll love Roger Alford’s gritty mystery that effortlessly combines new pulp with a classic noir style. 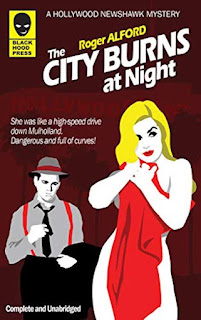 After the war ends in 1945, Tom Miller settles in California where he gets a job with the Los Angeles Chronicle. Covering an arson fire in town, he rescues children from the burning building, making a name for him, and is assigned to the arson case by the paper. A chance meeting at a party given by his boss, he meets two actresses that will be instrumental in his prime investigation. Both have knowledge that will help him solve the case – or be his death.

This was a fast moving noir that will keep the reader on the edge of their seat, with just enough twists for a few surprises, and a slam-bang ending. There’s lots of pulpy fun with characters that come alive. Highly recommended.

Tom Johnson
Author of INVITATION TO DEATH
Posted by Tom Johnson at 4:16 PM No comments: 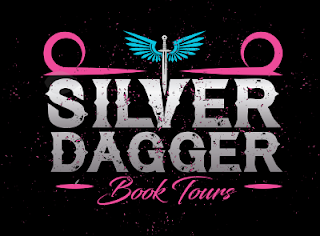 In Oklahoma, spring brings storms raging across the American prairie, too often spawning tornadoes that lash the land. But this spring Sydney St. John finds herself fighting for her life against another danger, one from the past. When her intern's body is discovered in the archives processing room, everyone wants to believe the girl's death was an accident or a horrible mistake. But Sydney sets out to discover whether the cruel murder of today resulted from another crime committed nearly seventy years earlier, searching for clues as only an archivist can. Her search leads her to another danger, different, in the person of Ben Bartlett, grandson of the creator of the very collection at the center of the mystery. Is he to be her lover? Or her murderer? 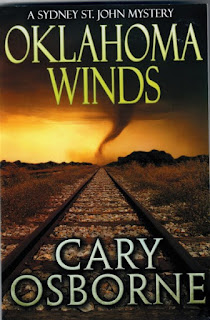 Sydney St. John is the archivist for records in Gansel, Oklahoma. It’s May of the present day, and tornado season. Everyone is watching the weather for violent storms. Arriving at work one morning she finds her university intern dead. Sydney believes her murder involves the latest material donated to the archives. While the local and state police investigate the homicide, she concentrates on the material, believing the answers lie there.

In 1938, Josiah Bartlett was a filmmaker that travelled to small towns making short films using local children. In Vernon, he wrote a play that involved a young 12-year-old girl being kidnapped, and two young boys rescue her from an old barn. But something goes wrong. The girl, Violet Parsons really disappears. At the same time, a banker is reported kidnapped and ransom of two hundred thousand dollars is asked for his return. The money was paid, but his body was later found. Sydney follows the clues in the archives and films, and a story slowly unravels making her believe that Violet Parsons is still alive, but using another name, and may have been involved in the murder of the banker. But complications arise when Josiah’s grandson, Ben Bartlett comes from California to look through the material. Sydney’s afraid she may be falling for him, and he could be the murderer. Mixed with the danger of a killer loose in Gansel, there are severe storms, as well as tornados that make life difficult in the area. 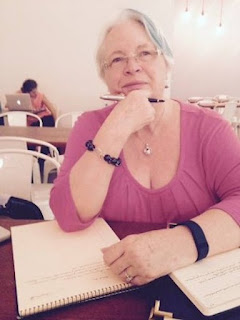 I was given a copy of the book for an honest review. This was an interesting plot, and I wanted to find out the truth about the missing girl in 1938, but like most cozy mysteries, the story moves slow, even with the storms and attempts on Sydney’s life. The story is clean, and sex is kept in the background. Highly recommended.

Posted by Tom Johnson at 7:52 AM No comments: 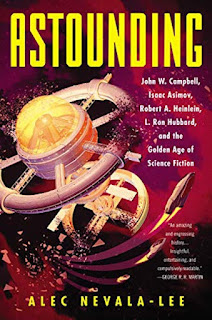 “A Monument To The Past”

Astounding was the leading science fiction magazine in the Golden Age of SF. When John Campbell took over editorial control the stories became more believable than the previous soap opera appearing in the news rack magazines of the day. The authors submitting to Astounding knew that their stories better show real science and nuts and bolts technology if they wanted published in John Campbell’s magazine. Three such authors were Isaac Asimov, Robert A. Heinlein, and L. Ron Hubbard. This book covers them and John Campbell in biographies that dig into their backgrounds, showing not only their talents, but also their faults. It also looks at the women behind the men. It’s a history that looks into the magazine in that period when Astounding led the field.

I was captivated by the stories I heard about these men and women. As a young reader in the early 1950s, I discovered Astounding and the other SF magazines, and read everything I could find, especially these authors, but also other science fiction masters like A.E. van Vogt, Ray Bradbury, George O. Smith, and the rest. For those of you that want to learn more about Astounding and the Golden Age of science fiction and the authors, I highly recommend this book.

Tom Johnson
Author of WORLDS OF TOMORROW
Posted by Tom Johnson at 1:18 PM No comments: