Somewhere far off the California coast in the Pacific Ocean a thousand meters down lies a Top Secret U.S. Government manned research outpost called Sea Station Umbra. Thought to be a Fukushima radiation monitoring station, its real purpose remains a mystery. A hundred people on Earth know of its existence but only thirty seven know what it is and why it's there. As things in the station begin to go horribly awry, a black ops mission Operation Deep Force is dispatched to investigate and intervene but encounters a situation far beyond their wildest imaginations. A deep-sea thriller-mystery filled with suspense, chills, and heart-stopping action, it takes you back to those days of 2001, the Abyss, and Sphere and leaves you cold, deep and gasping for more. 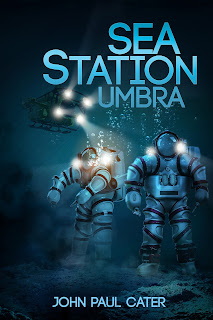 Matt Cross and Mica Briscoe are called back to the Navy for another dangerous mission. Four months after the events of PI Day Doomsday, their expertise is needed once more. Operation Deep Force, a Black Ops Group is monitoring the advance of radiation from Japan’s Fukushima Daiichi Reactor in the Pacific Ocean; a second operation involves spying on telephone/radio communications through the cable system on the ocean floor. But something strange is going on. Too many people on the secret sea dome, Discovery One, when there shouldn’t be, then people start to disappear. To make matters worse a Chinese spy sub disguised as a whale is monitoring Discovery One. Matt and Mica are sent below to discover what is going on, and what they find will almost kill them.

Starting from this great cover, there are thrills on every page. Even knowing the author’s background in science and mathematics I was surprised, and I think the reader will be too. I don’t want to give anything away, but the author uses a bit of sleight of hand in leading the reader in one direction, then pulling the surprise out of the hat – and it isn’t a rabbit. Be prepared for the unexpected. There is a slam-bang ending as everything comes together in the final moments, leaving little time left for survival. Highly recommended.


Author of SENORA SCORPION
Posted by Tom Johnson at 4:35 AM