The Mask of Sanity 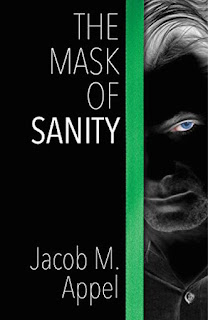 "The Study of A Sociopathic Killer"

Dr. Jeremy Balint has achieved a lot as a doctor and family man, and everyone sees him as a model professional in the medical field; a man who has everything. But under all that makeup is a sociopath, a person who can turn evil while doing good deeds. When he discovers his wife is having an affair with a fellow doctor, he decides to kill him. But knowing the police might suspect him immediately, he plans out a series of murders, leaving clues of emerald ribbons at each murder scene, and now the police suspect a serial killer, leaving a way open to kill his wife’s lover.

This was an interesting story, but no mystery to it, and was a bit boring. It is a good study on sociopathic killers, as we get into the mind of Dr. Balint as he plans and carries out each murder. And that, alone, is reason to read this novel. Highly recommended.

Email ThisBlogThis!Share to TwitterShare to FacebookShare to Pinterest
Labels: Jacob M Appel, The Mask of Sanity, The Permanent Press

In 2072, Earth faces the ultimate extinction event. In an America turned authoritarian, a race against time begins. To send a starship to a distant planet, where the remains of humanity can survive. Only a small number will be chosen for this final endeavor to save mankind from extinction, and among the contenders only the most resourceful will have a chance.
But while the government wants to choose loyal subjects in order to create another version of the society they have engineered, there are those who secretly conspire to let the starfarers choose their own destiny, free from the bonds of their mother world.
As mankind on Earth faces its final blow, the selected few set course for Aurora, more than 40 light years away!
Follow Tina Hammer, scramjet pilot and officer, Kenneth Taylor, Harvard professor and alienated by the nation he once held so dear, Maria Solis, daughter to one of the richest men in the world, a girl who would never have been chosen, except for her dad's money, on their various paths toward the greatest adventure in human history. 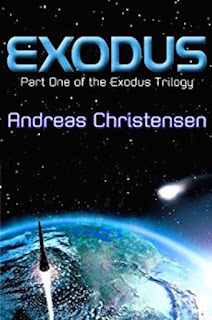 An interesting play on the Philip Wylie & Edwin Balmer 1933 novel, When Worlds Collide, and the 1951 movie of the same title. The planet, Lifebringer, from the third planet of the sun in a far away solar system is knocked out of orbit when the twin suns collide. Entering our solar system Lifebringer collides with Mars and the result is a massive planet now called Devastor on a collision course with Earth in 12 years. The president and his staff gather all the scientists and industry heads to prepare for an escape rocket ship to save some of humankind. The project is given the name Exodus, after the Biblical departure from Egypt.

Politics and other problems arise, but eventually 1600 people are selected to journey to the planet Aurora to establish a human colony. I enjoyed the book, though there were way too many characters and it was hard to keep track of everyone. Strongly plot driven, however, and highly recommended.


Author of WORLDS OF TOMORROW
Posted by Tom Johnson at 8:46 AM No comments:

Can a woman with permanence and family stamped on her forehead find the courage to love a footloose, but irresistible, murder suspect?
THE DREAM: After Ashley Sinclair’s grandfather is murdered, she dreams about converting the old Victorian ranch house she inherited into a haven for her younger siblings; twin sisters, and a brother recently paralyzed in a football accident. Because they were raised in different foster homes, Ashley fears they will reject her love. Other fears haunt her. Because her charming, handsome father abandoned her, she distrusts men. And she’s guilt-driven for not having kept her family together.
THE SUSPECT: Stone Hunter Price goes undercover to work for Ashley as he tries to clear himself of evidence that he killed her grandfather. A vengeful lawman vows to convict Stone. His own family believes Stone is a murderer. Alone and without funds, he’s estranged from his family.
THE TIMING: The lawman is minutes from convicting Stone. The murderer is seconds behind Ashley. When the clock strikes, who will win? 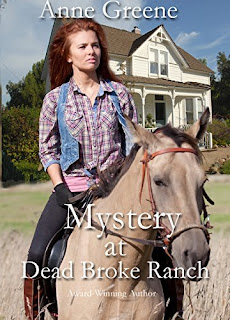 Ashley Sinclair inherits the Dead Broke Ranch in McKinney, Texas, after her grandfather is murdered. Ashley and her siblings had been raised in Foster Homes after their parents left them, and now Ashley, a physical therapist, has found her brother and twin sisters, and wants to take care of them on the ranch. However, her brother, Zach, is in a wheelchair and the ranch is in bad need of repair. If she can’t get the house fixed for her handicapped brother, he will be forced back into a Foster Home. Advertising for a handyman, she doesn’t know that Stone Price is the suspect in her grandfather’s murder when she hires him. But Stone is innocent, and wants the job to find the real killer. The police are about to arrest Stone, and the real killer is aiming for Ashley. Has God thrown these two people together just to break them apart again, or will Ashley discover the real killer in time?

This was another fine yarn from Christian author, Anne Greene, with a nice murder mystery to add to the romantic plot. Highly recommended.

Posted by Tom Johnson at 5:30 PM No comments: