The story kicks off in 1960 Los Angeles, with the daring kidnapping of the child of one of America's richest men. It then darts back and forth between a private detective's urgent search for the child, the saga of a notorious hit man in the days leading to JFK's assassination, and the modern-day story of a skeptical journalist researching the still-active conspiracy theories of the 50s and 60s, with the aim of debunking them. Just as the detective discovers that the kidnapping is a crime much larger than he imagined, and the hit man finds himself caught in a web that is astonishingly complex, the journalist discovers-to his horror, dismay, and even his jeopardy-that the conspiracy theories might well be true.
With expert pacing, sparkling dialogue, and plot twists that will keep readers entranced, Tim Baker's irrepressible debut novel is a joy ride through classic noir traditions, updated with a surprisingly contemporary sensibility. 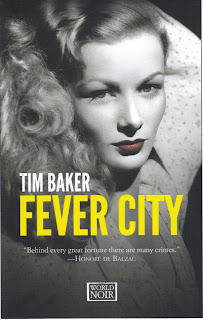 Normally, there are two things I absolutely hate in a story. One is using real people in scenes and narrative, the second is jumping back and forth in the tale from one point to another. This story contains both, but the author pulls it off. The author’s writing is smooth, and he keeps the same people throughout the tale, even if the years jump from 1959 to 1960, 1963, and 2014. It all stems from the kidnapping of the Bannister child in 1960 and the private eye handling the case, to the assassination of JFK in 1963 and one of the assassins hired for the job, and finally culminates with the son of the private detective searching for answers to the mystery in 2014. We are led through conspiracies with Marilyn Monroe, Howard Hughes and the Roswell UFO crash, to secret cabals, the Masons and Illuminati, and hidden temples in the homes of powerful men who control the political system of America and the world.

Two leading questions haunt the tale. First, what became of the missing child, and why are assassins trying to kill the son of the detective, now a reporter, trying to find answers to an old mystery. Everyone the reporter questions turns up dead, and some really weird people are trying to protect him before he meets the same fate. With most of the original people involved now dead, it seems he will not find the answer.

The story comes to an end in France, as the reporter finally learns the truth from one of the main players in this long-running mystery, although I had figured it out early in the story, and if readers will pay attention they will also. But it is certainly a good yarn, even if it does play loosely with real people in history. This book was hard to put down, and kept me turning the pages. Highly recommended for noir lovers.


Author of CARNIVAL OF DEATH
Posted by Tom Johnson at 4:09 PM