The Autobiography of Corrine Bernard

The elusive lover of Do Not Find Me returns to tell her side of the story in The Autobiography of Corrine Bernard. From her hapless childhood under Nazi occupation to her life as a woman of letters in present-day New York City, Corrine remains scrappy and wise. As a schoolgirl in Paris, she goes her own way, disinterested in most friendships, intensely drawn to the heroines she finds in literature and daring in the favors she is willing to trade with boys. When she is seventeen, she travels to America to visit her godmother and meets Charles Bernard, whose wealth and ruthlessness will alter the entire course of her life.
In a bold and mesmerizing voice, Corrine details her intense pull towards Charles, her lifelong attraction to the blue-eyed Italian named Gigi Paulo, and her observations of Paris, New York, St. Johns and London as she roams in exile for decades of her life. Dear Reader, she begins, I have my tales to tell. And so she does in this dark and compelling novel.
Corrine will surprise you, confide in you and ultimately win you, despite her ferocious and singular ways. The severed heart beats wildly beneath the floor boards. Do you hear it, she asks. By the end of her story, you will, dear reader, you will. 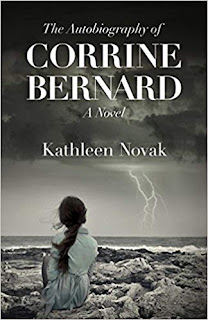 In the characterization, first person narrative, we’re treated to the biography of the title character, as we read her journey and adventures as she tells them to us in a voice always her own. And she keeps the reader mesmerized as those tales play out.

Although not me regular reading fare, the prospect of this book tempted me to read it, and the writing kept me turning the pages until the end of the saga. Probably not what most of my readers want, yet I think it will keep most wanting to learn more as they read into the so-called biography of Corrine Bernard. Highly recommended.


Author of THE MAN IN THE BLACK MASK
Posted by Tom Johnson at 2:34 PM No comments:

Email ThisBlogThis!Share to TwitterShare to FacebookShare to Pinterest
Labels: Katherine Novak, The Autobiography of Corrine Bernard, The Permanent Press

A routine visit to one of Sam Acquillo's job sites becomes anything but. The home's owner, Victor Bollings, is lying in a pool of blood, the back of his head bashed in. One of Sam's closest friends in the cabinetry trade is quickly behind bars as the obvious suspect. For the cops, this is all standard operating procedure. But as it turns out, nothing about the case is routine, obvious or standard in any way.
Sam and defense attorney Jackie Swaitkowski are used to an uneasy, though often reciprocal, relationship with law enforcement. But when the chief of police tells Sam to stay the hell away, this time he really means it. For Sam and Jackie, words like this are highly motivational, until strange new forces emerge from the shadows. Forces from well beyond the borders of Southampton, from worlds as sinister as they are unfathomable.
That doesn't mean Sam and Jackie still don t have a job to do. And a responsibility to defend the utterly defenseless: a Colombian immigrant with no legal status, no political power and no alibi, with the full weight of the judicial system local, state, national and international arrayed against him.
The eighth edition of the Sam Acquillo Mystery Series disrupts the illusion that the Hamptons are safely immune from the struggles that enflame much of the world. It s an examination of how fear of the unknown ignites prejudice and hate, overturning norms of decency and principle.
For Sam and Jackie, it's also a lesson in the interconnectedness of evil. 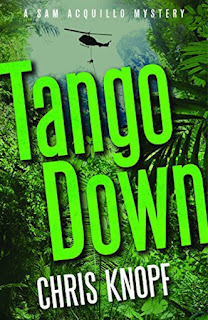 When a friend of Sam Acquillo, a Columbian immigrant, is arrested for murder, and Sam is told to stay out of the case it could be disastrous for him to intercede in the situation. But when more factors enter the already touchy case, Sam decides to take a hand in unraveling the mystery and solving the murder.

The plot centers around undocumented workers falsely accused of crimes they didn’t commit, giving honest workers from South of the Border a bad name. I found this comical in the reality of the crimes many undocumented workers do commit, while straining our educational and medical systems. But it is fodder for good fictional crime novels. The author is a good writer, and this is a good mystery for the fan. Although I’ve never cared much for his dialog, his plots are certainly topnotch. Highly recommended.

Posted by Tom Johnson at 9:35 AM No comments:

FBI Special Agent Drew Cady is reluctantly drawn into investigating the assassination of a sitting United States Senator. Strangely, the senator's death is linked to a murdered Baltimore junkie with an identical M.O.--a single stab wound to the heart and a typed eulogy left at the scene.
As Agent Cady deals with a professional hit man known only as the Canadian, a breakthrough Alzheimer's drug, a misanthropic hacker, and a Mexican drug cartel, he peels back the layers of deceit and comes to realize that even the reddest of red herrings can bite.
And unfortunately for all involved, the killings have just begun. 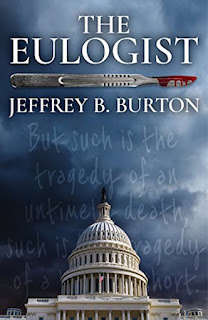 The assassination of Senator Taylor Brockman is the beginning of several murders by the killer known as the Eulogist due to the eulogy he leaves at the murder scene. FBI Special Agent Drew Cady happens to be in town, and director of the FBI C.I.D (Criminal Investigation Division)., Roland Jung brings Cady in on the case.

This was definitely an interesting case. What did Senator Brockman have in common with the other victims, one a junkie? The writing is descent, the pace moderate, and the characters more than paper tigers. The book was a bit long, I thought, and could have done with a few less red herrings. But mystery and thriller fans will enjoy the yarn. Highly recommended.


Author of THE MAN IN THE BLACK FEDORA
Posted by Tom Johnson at 7:32 AM No comments:

Email ThisBlogThis!Share to TwitterShare to FacebookShare to Pinterest
Labels: F.B.I., Jeffrey B. Burton, The Eulogist

FISTFUL OF RAIN is the sequel to 2017's South California Purples. Set in 1975, it is the story of a nation, a rural county, and a small town coming to terms with turbulent change. The theft of a rancher's livestock ends in an assault that escalates into arson, and the murders of nearly a dozen people. Residents of a "hippie" commune are accused of having committed the acts that have led the small county to the brink of a range war, and of feeding the tensions between generations. Sheriff Ty Dawson, a cattle rancher himself, finds himself at the center of a battle between town residents and the "hippies" who appear to be threatening their way of life, a struggle that leads both sides to violence. 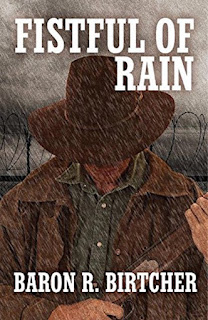 It’s 1975 and America has just gone through the sex, drugs, and Rock & Roll of the 1960s and saw the end of the Vietnam War. There are small crimes of livestock theft in the area, which quickly turns into arson and then murder. A mysterious commune of hippies living in the area is the immediate suspect. The violence escalates putting Sheriff Ty Dawson in the middle of a powder keg that could explode at any moment.

This is a nice follow-up to the author’s South California Purples, but I have to admit that his favorite book for me remains Hard Latitudes. However, the author’s writing style kept me turning the pages in this latest book. Highly recommended.


Author of THE MAN IN THE BLACK FEDORA
Posted by Tom Johnson at 5:37 PM 1 comment:

Holly Lin is living two lives. To her friends and family, she's a pleasant, hardworking nanny. To her boss and colleagues, she's one of the best non-sanctioned government assassins in the world.
But when a recent mission goes wrong causing one of her team members to die, she realizes she might no longer be cut out for the work — except the mission, as it turns out, is only half over, and to complete it will take her halfway across the world and bring her face to face with a ghost from her past.
Things are about to get personal. And as Holly Lin's enemies are about to find out, she is not a nanny they want to piss off. 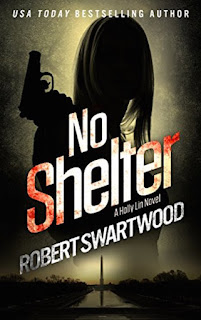 In this first novel featuring Asian-American Holly Lin, we learn her background and that she works as an assassin for the government, her boss is Lieutenant-General (3 stars) Walter Hadden; she also is employed as his family’s nanny, which gives her total access to the general. She is the daughter of a Japanese mother and Chinese father. She had joined the Army after high school, and while overseas her friend was raped and beaten by a soldier. She took it on herself to get even when her friend committed suicide, and she was arrested for murder. General Walters got her out of jail and brought her to work for his assassin unit. This is a complicated plot in which her task originally was to retrieve a flash drive from an arms dealer and take him out. There was a party with prostitutes that night and she is brought in as one of them. After killing the arms dealer and his guards, she gets the flash drive and rescues one of the girls. The Mexican girl tells her there is a ranch holding thirty or more illegal Mexican girls slaves for prostitution, and she takes it on herself to rescue them. Naturally, this upsets a cartel and they want her dead. And so does terrorists who were after the flash drive that is now in the hands of the American government. People who are supposed to be dead show up very much alive, which complicates the plot – and her life – even more.

This is a good story with plenty of action, and Holly Lin takes a lot of beatings before it comes to an end. My one big complaint with the story concerns the character of Holly Lin. The author does everything right with her, but he fails making her a female Asian assassin, instead she comes across more as one of the boys. As good as this story is, I’m hoping the sequels bring out both her femininity and Asian background. There are male authors who write feminine leads quite well. For instance, Ian Hamilton’s Ava Lee; Thatcher Robinson’s Bai Jiang; The Black Stiletto by Raymond Benson; and K.W. Jeter’s Kim Oh. However, Holly Lin is highly recommended for its great plotting and action.


Author of THE MAN IN THE BLACK FEDORA
Posted by Tom Johnson at 5:23 AM No comments: