All farmer Eben Smith wants to do is rectify an unjust government system he feels starves city folk in order to “fix” the economy.  Before he gets to the city for the first time, however, he finds himself at a strange crossroads. There what he’s bartering may be altering not only his own life, but also the destiny of alternative worlds! Includes: “Borrowed Glory” and “The Devil’s Rescue" 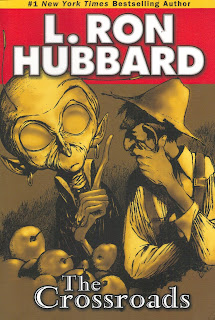 This volume actually contains three stories by the author: The title story, THE CROSSROADS, originally published in the February 1941 issue of UNKNOWN. Plus, BORROWED GLORY and THE DEVIL’S RESCUE.
THE CROSSROADS is a fun story about a farmer taking his fruit and vegetables to town to trade. However, he comes to a strange crossroad with roads leading in different direction. Not knowing which to take, he decides to rest at the crossroads. Oddly, travelers come from the different paths and find his goods were bargaining for.
BORROWED GLORY. An angel and genie make a bet against humans. The genie doesn’t believe humans will keep their word if given something for a time, and the angel has more hope for humans. The angel offers an elderly lady 48 hours of anything she wishes, knowing that at the end of that period she must give everything back. The genie doesn’t believe the old woman will. The old woman had worked all her life for very little, never having loved, or known the love of a man, and her wishes are to be young and beautiful, and to experience the love she missed. Can she return it if she does find it?
THE DEVIL’S RESCUE is about what the title says. Edward Lanson, Mate of the Gloucester Maid is the last survivor on his boat when sailors on the ghost ship, The Flying Dutchman, rescue him. And then who should appear but the Devil to bargain with the ship’s captain, and now another soul, Edward Lanson. Will the Devil end up with all souls, including Edward’s, or can the devil be beaten?
These were fun little fantasy stories, each interesting and entertaining in their own right. But of the three, my favorite is BORROWED GLORY, about the elderly woman wishing to experience love. Highly recommended for the entertainment value.


Author of THESE ALIEN SKIES
Posted by Tom Johnson at 4:53 AM