In Las Vegas, rookie EPA investigator Evangeline Bixby searches for her uncle, who went missing while seeking the source of a mysterious biological toxin. Retired cop Danforth encounters a man outside the downtown casinos who seems to rot to death before his eyes. Danforth’s former partner, Chuck Needles, recalls a series of unsolved deaths involving an unknown toxic agent.
Underneath the bright surface of Vegas, an evil darkness grows, savage, monstrous and ravenous. Bixby, Danforth and Needles will risk it all to stem a poisonous tide of murder and destruction hatching beneath Sin City. 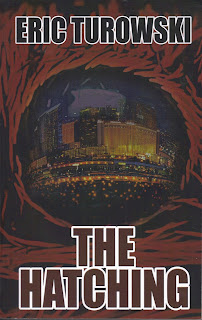 Gangster, Vinnie Sabrini, owns the Sirocco Resort and Casino in Las Vegas, including the Land of The Giants Zoological Gardens. The zoo contains a variety of animals, the largest and smallest of several species; for instance, the Komodo Dragons and crocodiles are some of the largest in captivity, while the pigmy elephants are some of the smallest. When seen together, you get the impression of giants. That is a gimmick to attract customers to the casino. Another gimmick is to insure a higher content of oxygen in the gaming room to keep the customers awake and over-active, bringing in higher stakes for the casino. But something is going on below the casino. When workers disappear, this can be covered up, but when bodies are found in the street or nearby the casino, and a biological agent is discovered as the cause, it looks suspicious to the EPA. When Agent Higgins Bixby comes up missing, his niece, Agent Evan Bixby, goes undercover to find out what he was investigating when he disappeared. She crosses path with private detective Danforth, and they follow leads leading to a government facility in the desert where secret experiments are being conducted; they are trying to grow food in radiated soil. What Bixby and Danforth discover sends them back to the casino in a hurry.

There are lots of things happening in this tale, and the author actually identifies the creatures causing the problems early on, but the reader needs to have a background in biology and zoology to figure it out. Clues point the reader in one direction, however, and that’s where I will leave it. The climax is big and would be perfect for the big screen. The author knows how to move the characters through exciting scenes of terror-filled action and horror. The writing is smooth and exceptional, and he weaves a tale of horror and suspense, as searchers trek through the caves and tunnels beneath the casino. It is not a novel for the weak of heart, for the monsters hiding in the dark will eat you. The scientific information has been well researched also, making the story believable. For there is proof of these giant creatures in fossil evidence, and we know why they grew to such gigantic size during the Carboniferous Period of our past. The only problem in the author’s rationale is the time limit: The Carboniferous Period had millions of years to produce these results, and in the case of this story, we only have about 20 years. Still, this well written work of fiction will keep the reader on the edge of their seat, and in the end, you will believe the science of the story was possible. Highly recommended.


Author of THREE GO BACK
Posted by Tom Johnson at 5:04 PM