The latest book in the series, Christmas Mail Order Angels, A CHRISTMAS BELLE tells Amanda’s story. Amanda expected a Wyoming cowboy, not a Southern Gentleman with a dangerous job. Can the wounded Mail Order Angel and the very Southern Wyoming Sheriff overcome the difficulties of their personal baggage and of the raw western boomtown where men die at the drop of a gold nugget and women are scarce as a tail-hold on a bear? Will the Sheriff put DUTY before love as the fiancé who jilted Amanda had done?

She’s a transplanted southern belle jilted by her finance’ who preferred DUTY to his family. Amanda’s desperate for a new start in a new territory with a Wyoming cowboy. She’s known as a mind reader, but in reality she reads the fleeting expressions people hide. Frank struck gold in the Wyoming Gold Rush and is elected Sheriff by the people of Angel Vale. He signed up for a mail-order bride, not because he wants a wife, but because he needs a mother for the baby boy left on his doorstep. Unfortunately for Amanda, Frank hails from the deep South and DUTY is his middle name. Will Frank choose love or Duty? 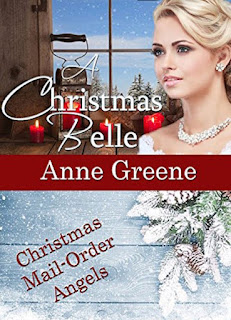 Frank Calloway owns a mine in Angel Vale, Wyoming, and decides to send for a Mail Order Bride to care for a boy he’s raising. Amanda Geoffrey is one of the brides traveling to Wyoming in answer to men’s request for a mate. She’s been corresponding with Frank, and only knows him from his letters. When she arrives Frank is standing there waiting for her, but when he speaks, his southern drawl puts her off, as she was jilted by a southern gentleman once before, and this looked like de-ja-vu. Frank is the local sheriff and is raising a child abandoned on his doorstep. Will Frank and Amanda be able to corral their differences and make a good marriage, and will he prove to be like the other man who jilted her?

This was another interesting yarn from Author Anne Greene, and I love the way she brings Faith into her stories. These little novelettes are clean and interesting tales, written by an author with values, and I highly recommend her books to all.


Author of COWBOY FROM TEXAS
Posted by Tom Johnson at 1:35 PM