A rogue satellite disappears off NSA's space radar and falls into Monterey Bay on the California coastline. The Agency's efforts to find the lost satellite are thwarted by a young oceanographer, Matt Cross, who, with his wife, Lindy, a local television reporter, watch the fiery landing from their honeymoon beach picnic and track it to its final resting place, five-hundred feet down in the Monterey Submarine Canyon. Bent on fame and fortune, they retrieve the satellite, examine it, and find an unfathomable object, a satellite sent back in time from our future. Revealing its contents to the American public in a history-making television report, they turn our world upside down and leave it with a life-or-death decision: assassinate a few innocent people or destroy the future of humanity.
This fast-paced techno thriller leaves you breathless as you race through its pages, searching for the answer. Based on the Grandfather Paradox, it is not a fantasy but a realistic depiction of an event that could happen tomorrow. Fasten your seat belts and ready yourselves for the trip of a lifetime. 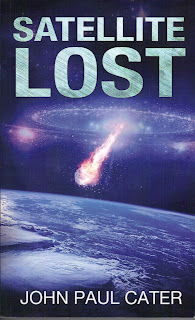 Newly weds Matt and Lindy Cross are celebrating their honeymoon on the California coast. Lying on the Monterey Bay beach they are attracted to a fireball falling into the waters off the shore. Strangely, the fireball doesn’t act like a meteor, as it slows before crashing into the bay. Matt, an ex-Navy diver, takes GPS readings, and a few days later makes a dive in his company’s mini-sub to retrieve the object.

Bringing it back to their home, they discover a teardrop shaped satellite, but that’s not the strangest part. When they open it, they discover it’s from the future, 2285, and there are now 54 states. A letter explains the situation clearly. A scientist in the future had discovered the wormhole effect, putting it to practical use, and aliens from another galaxy uses it to attack our planet. Earth is near destruction, and the president feels the only way out of the situation is for someone in the past to assassinate a relative of the responsible scientist to insure the wormhole effect is never discovered.

This was not only a fast paced thrill ride it’s an interesting take on time travel. Instead of sending their own assassin back in time, they use satellite technology to request us to kill a relative in the direct line. This is the Grandfather Paradox. By killing someone in the past, you destroy a whole family line up to and including the person you really want stopped. What would our society decide to do in such a case? The author’s solution is simply brilliant. Highly recommended.