Hathor Legacy: Revelations – Book Three of the Hathor Legacy Series
An enemy returns to spark new tensions between the Guardians and Novacorp. In the midst of the crisis, Nadira is given information about her parents that threatens to destroy her relationship to the Guardians and to Jonathan.
While Nadira searches for answers, Jonathan is enticed into the hedonistic world of the Novacorp executive class. His entertainment club attracts the elite of Hathor, but his notoriety comes with a price.
The worlds of the Guardians and Novacorp are put on a collision course where only one side may come out on top. Nadira is called on to make the ultimate sacrifice to save the legacy of the First Families, the original settlers of Hathor, while Guardians, Kasema and Deshtu PSI groups are faced with the choice to unite or be brought completely under Novacorp control.
Old scores are settled and long-hidden truths are revealed, and at the end Nadira and Jonathan’s relationship and their world will never be the same. 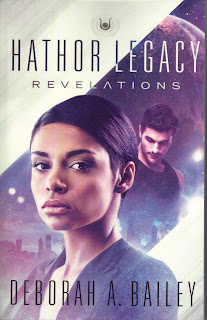 Mikal, the demented Sentry from the previous story, who was imprisoned in a penal detention facility after setting fires and killing several people, escapes and returns to Hathor. He still wants his rightful place in the power structure, and Nadira as his partner. Telling lies to Chairman Santos, the ruling government body of Nova City, he again tries to place the blame of his criminal acts on Nadira and Jonathan. Santos, who is being challenged for his seat by Jen Montaigne, sees an opportunity to stop her and the PSI class from taking control. Instead of sending Mikal back to the penal detention, he uses him in his battle to maintain control.

In the meantime, Nadira is searching for her family and answers to the past, while Jonathan is placed in a position he doesn’t want. He only wishes to be with Nadira and back home with their families. To make matters worse, the PSI groups want Nadira’s powerful PSI abilities to connect all their groups in a web, which will give them stronger PSI power, and the ability to stop Santos and Novacorp from complete control over them.

“Revelation” brings many answers that Nadira has been searching for, and really brings this story arc to a close, though there are more adventures planned. This is one of my favorite series, well written, with good characterization, and fast action. I didn’t want to put the book down until the end, and even then I wanted more. Yes, there is some romance, but it doesn’t overpower the plot. It’s plot and character driven, and SF fans will love it. I know I did. Highly recommended.