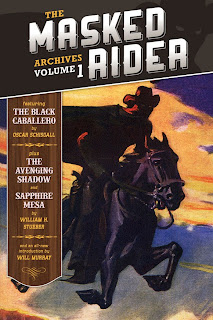 Volume 1 of this tomb includes the first three novels from 1934, “The Black Caballero” by Oscar Schisgall, “The Avenging Shadow” & “Sapphire Mesa” by William H. Stueber. The volume contains a nice Forward by Will Murray. The Masked Rider began in Ranger Publications, and featured a masked rider of the plains who fought outlaws with his Yukui sidekick, Blue Hawk. Also called the Robin Hood of Texas, they bore a slight resemblance to the radio character of The Lone Ranger and Tonto.  But the Masked Rider wore all black, including a hood with eye slots. These three early stories are typical pulp fun of the period, and bring back the thrills of those bygone days. The series would be written by a variety of authors, bringing their own feel to the series, but all brought exciting western tales to the readers in search of escapism during the Great Depression. Don’t miss this Altus Press reprint volume.

Tom Johnson
Echoes Magazine
Posted by Tom Johnson at 10:28 AM