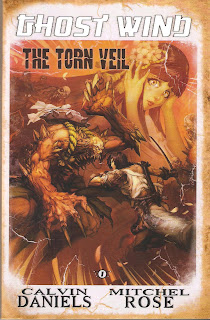 By Calvin Daniels & Mitchel Rose
ISBN #978-1451562446
Granton City Press http://www.wix.com/grantoncitydesk/togc
210 Pages
Price: $12.99
Rating: 4-Stars
The Torn Veil brings us deeper into the mythological Granton City, this time introducing us to the Chinatown district in a fantasy adventure of demons and other dimensions. The hero is Yoshi, The Ghost Wind, who is a ninja trained warrior-slave to the ruling monarch of the district. In a complicated story, gods and demons are in a battle for the control of mankind, and the center appears to be in Granton City, where the Veil that separates the dimension from our plain is becoming weaker. All parties recognize Ghost Wind as the one who has a chance to defeat the evil. If he fails …
This novel had the potential of being the best story featuring a new hero I’ve read in several years. Its premise is fantastic, and the hero is fascinating, while the action is furious and well thought out. The production and writing is top notch, and very little editing problems. However, there were way too many characters involved, and the authors jumped around too much. Instead of following the main characters, we follow each of them: sometimes several in the same chapter, which becomes confusing. In the end, I did not remember half the characters, and felt the authors should have spotlighted Ghost Wind more. Though set in the 1920s, the story reads more modern than the novels of that period. Martial Arts and machine guns are mixed in with magic and sex. Still, regardless of my negative feelings towards the story, this is a topnotch action adventure for the fantasy lover. Highly recommended.
Posted by Tom Johnson at 7:43 AM