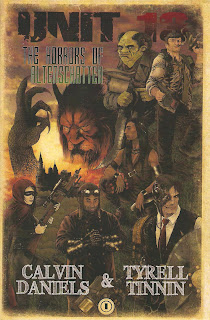 By Calvin Daniels & Tyrell Tinnin
ISBN #978-1451562453
Granton City Press http://www.wix.com/grantoncitydesk/togc
216 Pages
Price: $12.99
Rating: 4-Stars
Unit 13 #1, The Horrors of Atlenchatten pits the special army team against the Germans in France during WWI. A German scientist is turning men into beasts with the intention of using them to fight the Allies. Sergeant Crake leads his squad on the mission to destroy the evil plans and stop the horrendous experiments. His crew consists of an odd assortment of soldiers picked because of their special abilities. They will need those special abilities to succeed and return to England alive.
This story is non-stop from the first page to the end, with lots of action. The production and writing is topnotch. However, I had trouble reading the book to the end, but that was personal. Being a combat veteran, I found the combat scenes laughable. But comic book fans will find this novel fun and entertaining. The main characters are straight out of the comics. Supposedly the story takes place in 1918 or earlier, and is politically correct, with a woman, a black man, and an American Indian as members of the squad. We have The Starling, who wears a crimson cape and hood, and a domino mask to hide her face. The black man is called Soltice for his super ability. The Indian is called Smoke for his. Then we have Centurian, who is something of a cyborg – part man, part machine. Chimara is part man, part lion, and Grymm is “something”. We’re told he is a Troligre, an ancient race of beings. Oh, and then there is Haddock, a mind reader. As with other novels from Granton City Press, this story jumps around too much. And for some reason, writers seem to think a lot of sex and language is needed in a novel with soldiers. Another problem with the combat mission is the sex between the sergeant and a member of his team. Though it wasn’t my cup of tea, most will find it an exciting and entertaining read.
Posted by Tom Johnson at 1:20 PM