The Man In Purple

The Man In Purple 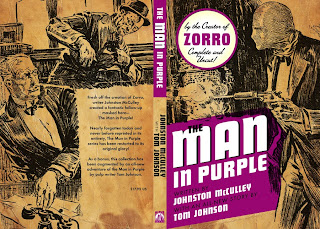 Johnston McCulley's The Man In Purple is available from Altus Press. This beautifully produced volume contains the three Man In Purple stories originally published in Detective Story Magazine in 1921. One of the early costumed pulp characters, following on the heels of McCulley's Zorro, the Man In Purple is a Robin Hood of the period, robbing from the unscrupulous rich and giving to the poor. A pact had been made between millionaire playboy Richard Staegal and his fiancée that before they marry, they would live an adventurous career, thus was born the Man In Purple. The two are assisted by Staegal's chauffeur. The name is derived from the purple outfit he wears as a disguise. The volume contains an Introduction by McCulley expert, Phil Latter, and a brand new Man In Purple story by pulp author, Tom Johnson. Available from Amazon and Altus Press.
Posted by Tom Johnson at 7:43 AM