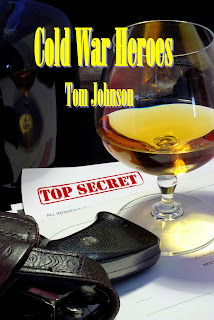 Cold War Heroes is at the printers, and the price has been set by NTD at $13.50, plus postage for paperback, and $4.99 for e-book. It will still be a while before it is released to Amazon and other major outlets.

Pulp goes Top Secret in this military comedy drama set in Europe during the height of the Cold War. A group of misfit MPs must confront spies and the black market while dealing with a boxing tournament on Post! Not since M*A*S*H* and Soldier In The Rain have we been treated to an inside look at military life with a touch of humor by a soldier who actually experienced it.

COLD WAR HEROES by Tom Johnson is loosely based on the author’s experience with the 202nd Military Police Company in France during the 1960s.
Posted by Tom Johnson at 5:30 PM