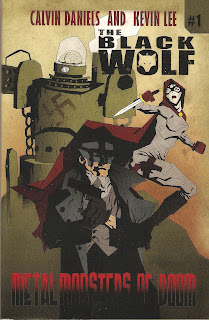 By Calvin Daniels & Kevin Lee
ISBN #9781450558044
203 Pages
Price: $12.99 Paperback
Rating 4-Stars
When scientists come up missing, and there appears to be foul play in Granton City, their paladin, The Black Wolf takes a hand in the investigation. Armed with a brace of Colt .45 automatics, and a knife or two, the vigilante enters the badlands of the city seeking clues. Wearing something of a wolf’s mask over his face, the underworld calls him The Black Wolf. In this debut novel, the hero goes up against pre-Nazis in 1920’s America’s. A super madman is building an army of metal machines to destroy America, beginning in Granton City. The authors quickly populate their universe with characters both foe and friendly, and we are treated to a fast-paced, action-filled adventure.
The production and writing in this book was superb, and the story well thought out. However, as with all of the small press publications I’ve read, this novel also suffers from editing problems. A good proofreader would have helped tremendously. There are lots of wrong words, some missing words in a sentence. One paragraph did not come to an end. One name changed from Alara to Adara. And there was an accidental switch in narrative when it briefly went from third person to first person. Things easily missed by an author, but would have been caught by a proofreader. Still, overall this was a fun read, and I highly recommend it.
Tom Johnson
Posted by Tom Johnson at 7:47 AM