THE DOCTOR IS IN! The world’s most famous crimefighter, scientist and adventurer from the Thirties and Forties comes out of his fifty-year retirement when his anti-crime operation is attacked. Someone has discovered his secret: a clandestine program to turn criminals into productive members of society. Aided by a new group of assistants, Ulysses Brazen, Jr. finds a genius equal to his behind a scheme to take over the world without firing a shot. 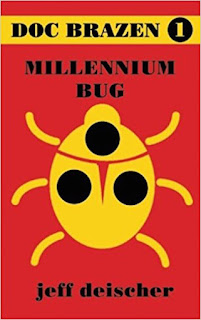 “Action From Beginning To End”

Set in contemporary times, Doctor Ulysses Brazen, Jr. returns to New York from retirement in Coronado when ex-criminals suddenly return to their old habits after years of being cured. Brazen, now approaching 100, still looks to be in his fifties; a giant, muscular golden man, he had been instrumental in fighting crime and world power grabbers in the 1930s and ‘40s, and curing men of criminal behavior during a brain operation. But now it appears someone has discovered his methods, and is returning criminals to their original ways. Doc Brazen knows it’s a direct attack on him and his past.

His old team members are now all dead, but he has new followers to take their place: Ozomatli, called Oz, and his cousin, Tlazotidapilzin, called Noble, are two Aztec warriors he has trained. Both are young, in the twenties, and may be sons of previous aides. Then there is Robert Laffite, called le Chat, a French cat bugler that could not be cured, but has a good heart; and Henry Prevost, a Gulf War vet and computer genius; Finally, Norma Crale, the granddaughter of a famous aviatrix and pilot extraordinaire, who goes by the name of Thunderbird: These are the new aides of Doctor Brazen.

Possibly the author’s best yet. This is actually a clone of Doc Savage, but Doc is an old man now – though he’s still in great shape and married to the Aztec Princess. Pat is mentioned, as Lucrezia Brazen, and was listed as missing in the Amazon Jungle in 1961. Oz has the appearance of a monkey or ape, so he’s apparently Monk’s son. I’m not sure if Noble is also a son of one of the aides. There is action from the beginning to the end, and though old, even Doc is still The Man Of Bronze, and he faces an old foe once again. It was a great story, and the new aides are fun, but regrettably I did miss the old gang and Pat Savage.


Author of THE MAN IN THE BLACK FEDORA
Posted by Tom Johnson at 4:17 PM