Across A Wounded Galaxy 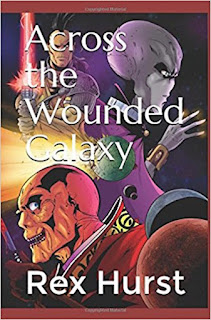 A sadistic pirate clan shanghais a forced-grown Gen-Human three months from his decanting bottle. Three aliens track a gleeful villain who is hell-bent on destroying his own world. A military failure on a ruined planet finds only one chance left for his personal glory. All their paths collide together in a galaxy at war. Worlds destroyed. Civilizations ruined. Cities devastated. Join them on this trek across a wounded galaxy

In this character driven science fiction yarn we are introduced to numerous alien races, as well as POVs. It is an exciting tale of war, devastation, and it’s effect on the individuals involved.

I had a difficult time following the story, but it wasn’t due to the author’s writing. The Kindle version kept jumping on me. For instance, from Chapter One it jumped to Chapter Seventeen, and from Page 10 it jumped to Page 84, and this jumping continued. I was constantly forced to search where I was at when the pages jumped on me. I don’t know if this was a formatting problem on this Kindle story, or my personal Kindle, though my Kindle has never done this befofore. I’m not sure if I missed something important in the story, but the problem with formatting kept me confused. The story itself was very interesting, however.