When aliens abducted Sheldon Buckley, they had no idea they had taken the wrong man. When another captive told Buckley he was dead to the earth, he would never see his family again, and there was no escape, Buckley put his special skills to work taking him back to earth. The U.S. Government left a trail of death and destruction to hide what they knew, that aliens were mining the earth’s population and technology. They now needed Buckley’s help, and at the same time, keep the secret from the public. 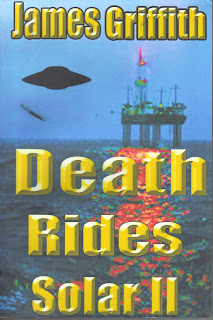 Unbeknownst to Sheldon Buckley when he’s flown to the offshore oilrig floating on the Gulf Coast to check out what is believed to be a system failure of his program, an alien space ship really caused the failure. What’s more, the aliens have been capturing humans on ships, along with their electronics for many decades. This time they are after the people and electronics on the oilrig and Sheldon is part of the package.

Aliens have a problem, they only have four fingers, and no thumb, and humans have five fingers and a thumb, something necessary for the small electronics needed on their massive ships. There are other reasons, too, such as human manpower, and -- food. Men with intelligence are kept to control the lesser humans, who become drones to do manual work. Sheldon is promptly put in charge of more intelligent work, but he’s determined to escape if there is ever a means open to him. He meets a fella traveler named Captain Allen Hale, taken in 1984, and they become friends. But it takes five years for Sheldon and Hale to find their chance to escape on another trip to Earth.

In the meantime, two FBI Agents, Randal Miller and Oscar Belknap have been secretly investigating the oilrig case, which was hushed up by their superiors. An assassin working for the government is killing off witnesses, and even the FBI agents are being watched as targets. When the aliens strike again, this time at an Alaskan pipeline, some tough men with pipes and wrenches oppose them. An EPA Agent named Helen Hunt with a camera catches the attack on film. This time the news media has film of the alien attack and the government can’t cover it up. However, Hale and Sheldon are not able to escape from the ship as planned. The aliens no longer want them and they are released, and the government puts them in a Safe House until a congressman gets to them. Now plans are made to use Sheldon and Hale in a trap to capture or kill the aliens, but it involves them going back on board the alien ship with the Navy SEALS. Can it be done?

This was a fun story, actually my first involving an alien abduction and time on board an alien craft with strange beings from another world. The author admits to a UFO sighting, but was never abducted to my knowledge, yet he spins an exciting yarn with an intelligent spin. Highly recommended.