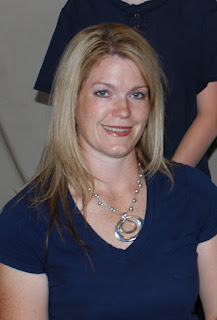 I met DS Johnson on a FB Author Promotion group recently. The cover of her book, REALMS OF EDENOCHT just jumped out at me and said, “Read this book.” Naturally, I “liked” the post, and soon the author and I were friends on FB. After reading the novel, I was delighted to find that it was just as exciting and wonderful as the cover. As with any new author just starting out it is essential to meet fans, and with that in mind I asked DS Johnson to visit PULP DEN for a few questions. Please meet DS (Suzanne) Johnson. 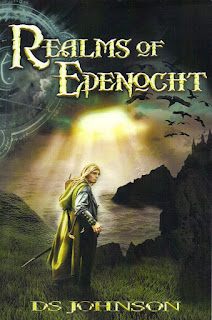 Tom: Suzanne, thank you for sitting down with me for this interview on PULP DEN. First, how about telling your fans a little about yourself, your family, and where you live?

Suzanne: First of all thank you for inviting me to sit down with you. It's a honor for me as a new writer to have this connection with such an accomplished writer such as yourself.
A bit about me, I'm the middle of six and grew up in Utah. I met my husband after a divorce and two kids. We have been together now 15 years with three more making his 1, my 2 and our 3 equal 6.

Tom: From reading your novel, it is easy to tell you are an intelligent writer, and interested in the YA Fantasy genre. What made you decide to write REALMS OF EDENOCHT, and was there a particular influence?

Suzanne:  The interesting thing about this writing gig is that I was in resource as a kid and grew up thinking I was dumb. My mom has Parkinson’s disease and lives with us. As her disability and age became more time consuming I needed something I could do from home. The thought came to me to write a book. I was like "who me, remember I graduated school with a 2.9." But the thought kept coming. So, I gave in and started. It took me several years to start teaching myself with books and online resources. I chose the YA fantasy genre because my husband is a big online gamer and my young boys were following in his footsteps so I wanted to do something that they would enjoy.

Tom: Along the same line above, what writers influenced you, if any, and whom would you say your writing style most resembles? And are your stories more plot driven or character driven, do you think?

Suzanne: Well I'll admit I don't read fantasy. Not that I wouldn't enjoy it now but would have to say my favorite book is A Pocket for Corduroy because I never read as a teenager or adult. I don't know who my writing style resembles because the books I read are on how to write a book. My most influencing author would be Martha Alderson of The Plot Whisperer. I think my stories are a balance between plot and character. I try to have a good plot that moves forward but I also know what my characters will and won't do so it stays a good mix.

Tom: Tell us a little about REALMS OF EDENOCHT without giving any spoilers away.

Suzanne: The Realms of Edenocht is a YA Action Adventure Fantasy about a war wizard that emerges from a hidden time realm and is tasked with destroying the four ancient relics of the Sev-Rin-Ac-Lava, in order to keep the Shadow from using its powers to become as the God's. It's a world of divided realms, elemental magic and magical creatures.

Tom: Besides YA Fantasy, have you considered writing other genres down the road, and if so, what would they be?

Suzanne: I was just thinking of writing a few children's books for my 5-year-old daughter. I forgot how much I loved telling stories as a kid until my little sister, now 40, asked if I remembered all the unicorn and Pegasus stories I would tell her at bedtime. It got my juices flowing so I think I might make a go of it. I had forgotten that I even told her bedtime stories. I guess I've been a natural but had forgotten through the hardships of life.

Tom: In your novel, REALMS OF EDENOCHT you have some very interesting characters, in particular Shaz and Serin, but they are not the only ones. The novel actually follows several different character lines. Which characters, if any, are your favorites?

Suzanne: Oh goodness, I can't pick a favorite. I think like most writers you become quite fond of the characters you create. Each having a piece of yourself and others that are close to you. Shaz was the paladin character my husband played when we first got married. So naturally much of his personality is from him with a mix of my now fourteen-year-old son. Riddick is fashioned after my ten year old. Then I started playing and created Serin who's real name was Serindipity. We played them for several years until the game started taking too much time. I would use our adventures in the game to tell my boys bedtime stories, which became the Realms of Edenocht. But when I created the Minca I quickly fell in love with them too. Azrak is based on one of my favorite movie characters so naturally I love him too, but then there's Helios, and well you get it.

Tom: What do you find to be the most exciting part of the creating process?

Suzanne: Sitting at the dinner table getting ideas from my kids. It makes a regular 30 min dinner into an all-evening event.

Tom: Along the same subject as above, what do you find to be the most difficult area in the creating process?

Suzanne: I think for me it's getting all the scenes into the correct sequence and then making sure I answered all the questions and didn't leave anything out.

Tom: Are you working on a sequel or anything else right now? And if there is a sequel in the works, when do you expect it to be out?

Suzanne: Yes in fact Realms of Edenocht is scheduled to be a six book series. I have most of book two finished but finding the time to get it organized and flowing well has proven difficult this year. My hopes are to have it out by the middle of next year. I also have several novellas planned for each book as tangent stories of each book. The first of which is also nearly ready.

Tom: Besides family and writing, tell us about any hobbies or community service you may be involved in, and any other activity you would like to mention.

Suzanne: I am a trained hairdresser so that keeps me busy and I sew and do all things crafty.

Tom: What advice would you give other aspiring authors hoping to break into the writing field today?

Suzanne: I think I would tell them to never give up. I taught myself and it took a long time. I wish I had a check list of things to give but every one has to learn things at their own pace and understanding. But never give up.

Tom: And most important, where can fans find – and buy - your novel, and do you keep copies on hand for autographs? Please include website and Blogs.

Suzanne: They can find me at www.dsjohnsonbooks.com and on Amazon, Lulu and Kobo and yes I do keep copies on hand.

Tom:  And now a question from left field.  If you could, would you choose to live in a parallel universe as one of the people in the worlds you create?

Suzanne: Hummm, I don't know. I guess you can say I already do since Serin is my character from the game we used to play, I kind of feel like she would be myself in that alternate reality.

Tom: Suzanne, thank you very much for consenting to this interview.

Suzanne: Thank You!
Posted by Tom Johnson at 6:23 PM