"In a world of eternal slumber, it is but wise to foresee the future. Where true beauty is priceless, for creativity can be so far ahead. Do our eyes not see that far ahead, does our brain make baseless theories in greed? Here we live in a world of zombies, value is only for the present, who cares about the future? Our air is cold and bitter, the sky is ever dark, and the land is barren, for the earth is in parts. Long ago, it was not when began the curse, in a time when all was but lost. Tall buildings seared through the dark clouds, but no height made visible even a ray of light. A city built in ruins and curses, never is it filled with zeal and happiness. People however, can choose to defy nature, jewels of ruby and stones of blue sapphire. All were embedded in layers of white gold, the gold that coated the mechanized bricks. Bricks of steel and skeleton design, they shifted forever each year with a chime. Sound of cogs, when metal contacted metal, made lively the mood of a silent city. Grey were the streets and white were the roads, street lamps of rose gold, enclosing bulbs of diamond pose. Diamonds that were alien used to trap small stars, forever emitting a bright white light. Fake flowers of caesium behind gates of rubidium, were held in place with emerald stems. Each building unique and everything but bleak, with engraved patterns of blue platinum nailed into walls. Gold roofs and doors with all their glory, windows of minerals and tampered glass. A beauty it was and a shame to be true, each night when the lock down began. Barriers were raised and gates were closed, doors and windows were securely locked. Curtains drawn and lights switched off, lamps were covered as the dark night dragged on.....”
I was told history repeats itself, so does that mean we are going around in circles, or are we spiraling into darkness? 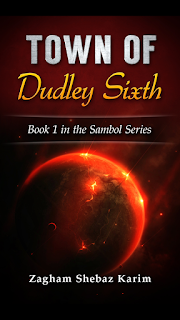 In the city of Lukememilldale, on the planet Kepler, we meet Sambol Sixth and his family. A wall separates the citizens from the outer barbaric tribes. Sometime in the past a giant spaceship crashed and an invasion turned their planet dark. I think. This wordy piece of work seemed little more than the author expressing his ability in vocalizing words onto paper, creating the printed word into a story of sorts. Basically, we are told what is happening, instead of being shown. A man looks like a coward, another looks brave. Someone is good with a sword – please show me, don’t just tell me. At times I thought I was reading The Hunger Games, at other times it felt more like a poet retelling some ancient saga at a campfire. Yes, the author uses pretty words, and his syntax is good, as is his storytelling. There’s just nothing to keep the reader on the edge of their seat, or more importantly, turning the pages. If you like reading pretty words, this book is for you; otherwise I can’t honestly recommend it.


Author of WORLDS OF TOMORROW
Posted by Tom Johnson at 4:30 PM