All The Missing Girls

It’s been ten years since Nicolette Farrell left her rural hometown after her best friend, Corinne, disappeared from Cooley Ridge without a trace. Back again to tie up loose ends and care for her ailing father, Nic is soon plunged into a shocking drama that reawakens Corinne’s case and breaks open old wounds long since stitched.
The decade-old investigation focused on Nic, her brother Daniel, and boyfriend Tyler, and Corinne’s boyfriend Jackson. Since then, only Nic has left Cooley Ridge. Daniel and his wife, Laura, are expecting a baby; Jackson works at the town bar; and Tyler is dating Annaleise Carter, Nic’s younger neighbor and the group’s alibi the night Corinne disappeared. Then, within days of Nic’s return, Annaleise goes missing.
Told backwards—Day 15 to Day 1—from the time Annaleise goes missing, Nic works to unravel the truth about her younger neighbor’s disappearance, revealing shocking truths about her friends, her family, and what really happened to Corinne that night ten years ago. 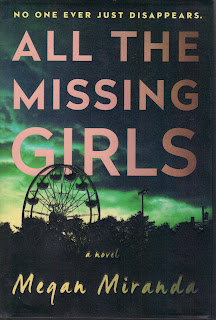 Leaving Cooley Ridge for college at 18, Nicolette left a life behind her, but something was pulling her back. Something unfinished. Working as a school councilor. She is on break when she gets a note from her father that only says, “I saw that girl.” That “girl” was her best friend, Corinne, who had disappeared ten years ago after a party night at the local fair. Her father was in a care center, sometimes in normal mind, but most times in another world of his own. But Nic has to go back. Her brother Daniel needs to sell the family house, and they need their dad’s consent. But why is her dad bringing up Corinne at this point? She needs to find out, and bring closure to her past.

Ten years ago, when Corinne disappeared, Nic’s close friends were suspects in what the police considered a homicide case. These included her brother, Daniel, her boyfriend, Tyler, and Corinne’s boyfriend, Jackson. But her body was never found, and not enough evidence to bring charges against any of the suspects. But now there is another missing girl, Annaleise, who was 13 when Corinne disappeared, but 23 now. Before she disappeared Annaleise called a cop asking to discuss the old case, but before they could meet, she too was gone. Now the old case is back on everyone’s mind, and Annaleise’s disappearance may have something to do with the ten-year-old disappearance of Corinne.

This was a well written, and interesting murder mystery. The author moves the story backwards, which could be confusing to some, but it works better this way. I thought I had the murder solved within the first fifty pages, but didn’t count on the sleight of hand the author used to keep us off balance. The main character is telling us the story, so she reveals the mystery how she wants us to understand it, keeping us focused elsewhere. I liked the plot, and the author’s writing style, and the mystery should capture the reader’s interest, and keep them turning the pages. Highly recommended.


Author of CARNIVAL OF DEATH
Posted by Tom Johnson at 12:49 PM