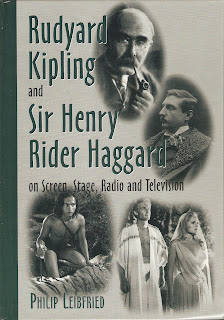 Rudyard Kipling And Sir Henry Rider Haggard
“On Screen, Stage, Radio and Television”
By Philip Leibfried
McFarland & Co, Inc.
ISBN #978-0786437467
Price: $39.95
214 Pages
Rating 5-Stars
Two early British writers to achieve popularity in England and the U.S. were without doubt, Rudyard Kipling and Sir Henry Rider Haggard. Kipling’s poetic writing style with such work as Gunga Din, to Haggard’s bold adventure African romance novels are discussed in this book. Their popularity continues today, more than a hundred years after writing some of their groundbreaking fiction, which influenced many writers that followed. The author of this study gives a brief history of their lives then, as the sub-title refers, a history of their fiction appearing on screen, stage, radio, and television.
McFarland’s production is, as always, well designed, and the author has included movie posters and movie stills from such movies ranging from the silent era of the 1917 Albert Roscoe and Theda Bara in Cleopatra, to the 1965 Ursula Andress portrayal of She, and beyond. Kipling’s filmography includes the 1937 Captain Courageous with a young Spencer Tracy and John Carradine, and Sabu as Mowgli the jungle boy in the 1942 Jungle Book. This 214-page tome is filled with great reproductions, and is well researched by the author.
Whether you love their fiction or cinema, this book is a must have for Haggard and Kipling fans!
Posted by Tom Johnson at 10:27 AM