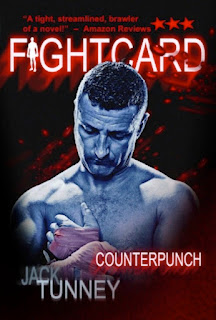 Fight Card: Counterpunch
By Jack Tunney (Wayne Dundee)
Kindle Edition $2.99
Fight Card Productions
ASIN #B007GYYPB8
Rating 5-Stars
Boxing Returns With Another Knockout For Fight Card!
Aging boxer Danny “The Duke” Dungrunski may not be championship material, but he’s still doing well on the local Cards. However, when Packy, his manager dies suddenly from a heart attack, Art LaBree takes him on for the scheduled bout Packy had arranged earlier. After Danny wins by a knockout, mobster Kevin Malone sends him an envelope with five fifty-dollar bills, supposedly his share in a fixed bout with his last opponent, arranged by Packy. Now Malone tells The Duke he must do what he says in future fights. Danny doesn’t believe his old manager was crooked, and refuses the mobster’s money and offer. But Malone has other plans.
This is another great entry in the Fight Card series created by Paul Bishop and Mel Odom, and Wayne Dundee does a nice job on the boxing scenes. The Duke is an honorable man, and wants to see Packy’s name cleared. There is also a bit of romance, but it doesn’t interfere with the story or action.
Posted by Tom Johnson at 11:46 AM