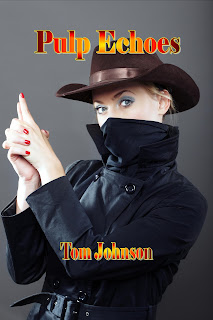 PULP ECHOES
By Tom Johnson
ISBN #978-0982679586
NTD www.bloodredshadow.com/
Price: $15.50
238 Pages
Rating 4 Stars
Memory Lane can take you to some strange places such as comic book stores with impossibly manly heroes even more remote than James Bond.  Unless, of course, they’re women.  Then they are equally remote, impossibly beautiful and deadlier than the male.
Johnson’s introduction to Pulp Echoes, a collection of pulp fiction stories, qualifies the author as a scholar of pulp fiction as well as a writer.  The reader is privileged to enjoy a history of the genre as well as an index of all the heroes who appeared, disappeared, and now reappear.  The stories are set in various time periods, both modern and wartime. If modern, the author must maintain the action and uncompromising style of the genre while introducing modern touches, such as cell phones.  Johnson does this very well, smoothly and unobtrusively.
The collection includes a Black Ghost story (“Carnival of Death”) ending enigmatically, leaving the reader with a question and waiting for the next story.  The Black Cat appears as “A Cat Among Dogs,” displaying her usual skill with unique weapons and some imaginative ways to short out the lights.  In “Blind as a Bat,” the Bat displays a talent for disguise as well as bringing justice to a Chinese crime operation.  Captain Adventure responds to “Terror in the North Country” and Johnson surprises his readers by referencing Sasquatch and the Mayan language…possibly a first in pulp fiction history.  The Crimson Clown (particularly scary to this reader) takes on the mob and meets The Black Cat, two superheroes in the same story!  Then the reader takes a trip back in time to the late 1700’s in California territory to meet Senora Scorpion on a mission of revenge.
The pulp fiction genre requires that the good guys are clearly distinguished from the bad guys and justice must prevail.  By today’s standards, such requirements would put the writer in a straight jacket.  Johnson breaks out of these limitations by introducing intriguing characters and ingenious weapons, such as a gun that shoots some sort of knock-out gas.  It takes a resourceful writer to stay within the pulp fiction rules and still introduce variety and surprise.
The reader can count on excitement and, if old enough, more than a bit of nostalgia from Pulp Echoes.
Review by JoAnna Senger
Posted by Tom Johnson at 4:32 PM