BEHIND THE MASK Volume One 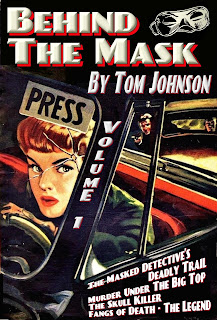 BEHIND THE MASK Volume #1 By Tom Johnson. Published by FADING SHADOWS. Cover titles, design, and logo created by Tom TV Powers. A string of murders and kidnappings lead the Masked Detective on a manhunt that could result in his own death. Follow the intrepid crime fighter as he attempts to unravel these hideous crimes as he embarks on a deadly trail of mystery …
Clues lead the The Black Bat to theorize that small time crime originates with a traveling circus. He turns his information over to the police department, through his alter ego, blind Tony Quinn. However, the case is not pursued  until a murder is reported at the circus. Now, the Black Bat, nemesis of the underworld, takes flight to find the killer and bring the criminal activity to a close. But at every turn the Black Bat and his team of crime fighters find that they are faced by a super mind working behind the scenes.
When a new inhuman terror strikes the Slums of Akelton City, leaving the acid mark of a Skull on victim’s foreheads, can the Purple Scar uncover the diabolical scheme of a madman, and protect the innocent citizens before death also finds the woman he loves?
Private detective Sam Doyle took the case because he needed the money, but he knew the dame’s husband would never cheat on such a classy doll. But what he turns up is more than he bargained for – Hoodlums, snakes, and a cute kitty!
The Legend disappeared in 1953, and now it’s a decade later, and Carlos Donatti wants to be a Big Shot. What Carlos doesn’t remember is Legends never die.
Available on Kindle format only, for $2.99, at https://www.amazon.com/dp/B01N5VKAZG/ref=sr_1_fkmr0_1?s=books&ie=UTF8&qid=1485976339&sr=1-1-fkmr0&keywords=behind+the+mask+%231+by+tom+johnson