And Death Will Seize The Doctor, Too

CHRISTIAN THOMPSON HAD THE POWER to heal people with a touch of his hand, but in order to cure one person he first had to kill someone else.
The man he’d come to kill on this particular night was Walter Chambers. Walter Chambers made his living by robbing houses, and sometimes he wound up killing the people who lived in them.
Walter wasn’t an especially bright or talented or even cunning criminal but he did manage to get away with what he was doing for almost thirteen years before he was finally caught, tried, and sentenced to death. That sentence, as far as most people who cared to know knew, had been carried out about a half hour ago.
Christian, of course, knew better. 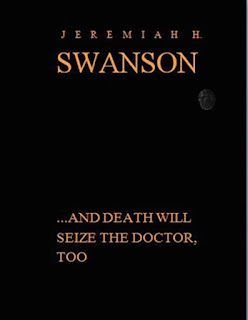 “An Odd, But Riveting Story.”

In one of the most interesting plots I’ve read recently, Christian Thompson discovers he has the power to heal, to bring people back from the brink of death. This could be a good thing, but when a shadowy organization helps him with his power, he learns there can also be problems. His wife needs healing, but he’s forced to heal someone else instead.  You see he can only heal after taking a life. A death for a life. Now we can see many problems arising with this power.

The book is a journey, and a long one, sometimes quite confusing. But it’s never boring. We want it to end, but at the same time, we don’t. In fact, while reading the novel I kept thinking it would make a good TV mini-series. It often jumps around, and leaves us wondering, yet the end is satisfying. My only real problem with the book is its length. I think the author could have tightened it considerably, even leaving some stuff out completely. Minor flaws to be sure. Highly recommended.


Author of BEHIND THE MASK
Posted by Tom Johnson at 4:19 PM

Email ThisBlogThis!Share to TwitterShare to FacebookShare to Pinterest
Labels: And Death Will Seize The Doctor Too, Jeremiah Swanson, Paranormal Thriller