High atop the Clarion Tower, a blinking red light begins to pulse signaling one of New York City’s most illustrious, vigilante heroes, the Phantom Detective. In reality, he is Curtis Van Loan, a debonair playboy millionaire well known in the society columns of all the major dailies. What is hidden from the public is Van Loan’s dedication to law and order. A decorated combat pilot during World War I, he is an expert fencer, ju-jitsu master and speaks a dozen foreign tongues fluently.
Hidden in his Park Avenue penthouse is a secret closet containing clothing of all descriptions and sizes. Along the wall are weapons; automatic rifles, sub-machine guns. There is also a miniature lab along with an extensive make-up kit that allows him to don different faces as his mission requires. Forget the silly Top Hat featured on the old pulp covers, while in action the Phantom Detective wore a belted topcoat, a fedora and black domino mask. He carried a .45 automatic and a hidden knife in his left sleeve.
This popular pulp icon returns now to once more battle villainy and crime in five new cases by Gene Moyers, Whit Howland, Robert Ricci and two from Gary Lovisi. Each recaptures the fun, excitement and thrills of this classic hero from the past—the Phantom Detective! 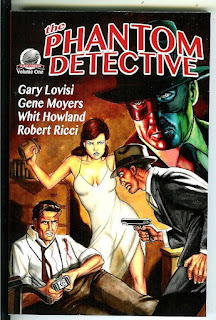 This anthology actually contains five stories featuring The Phantom Detective: The Phantom Menace by Gary Lovisi; Circle of Despair by Gene Moyers; Campaign of Destruction by Whit Howland; Harbor Lights by Robert Ricci; and The Devil’s Minions by Gary Lovisi: The Book starts off with a great cover by Pat Carbajal, with some good illustrations inside. My only complaint is that the interior artwork should have featured scenes of action, not just people standing around, or a car parked in front of a building. The pulps gave us many pages of action scenes.
Gary Lovisi starts the book off with his tale, The Phantom Menace, where the mayor sets the police against the Phantom. But as we quickly learn, he’s getting his orders from someone else. Gary always gives us a good story.
Gene Moyers’ tale, Circle of Despair could have been in a pulp Phantom Detective issue, as far as I’m concerned. It’s my favorite yarn in this anthology because the author did his homework, and this even smells like pulp. There were more than the usual editing problems in it, but not enough to damage the story. Oh, the Phantom becomes the Shadow at one point, which should have been caught by an editor. Twenty years previous to this tale taking place a group of college friends belonged to an un-American group, and now someone is blackmailing them, and a reporter may have discovered it. Now someone is killing off members of the old group, and it’s up to the Phantom to uncover the murderer.
Campaign of Destruction by Whit Howland is another plot with the crooks trying to turn the people against the Phantom. They’re running their own man against the current mayor, and trying to prove he’s done nothing to stop the Phantom and crime. Dan Fowler is in town checking on some things, too, and ties up with the Phantom. There’s plenty of action in this tale with enough purple prose to fill a real pulp yarn. Steve Huston, Muriel Havens and her father are in this one too. It is a nice little pulp yarn.
Robert M. Ricci’s Harbor Lights is my least favorite in the anthology. Basically it’s a tour and history lesson of Boston. Yes, the Phantom comes to Boston in search of Muriel Havens and Steve Huston who have been taken prisoner. A weak plot, and the author says that Frank Havens doesn’t know the identity of the Phantom, so he hasn’t done his research. Frank Havens got Dick Van Loan started as the Phantom. Surprisingly, he does bring in a character not many people know, Jerry Lannigan, a mechanic in Van Loan’s unit in WWI. Lannigan only made a few appearances in the novels, and I liked the character, so it was a pleasure to see him brought back in this story. Oh, we get to meet a young Jack Kennedy also.
Gary Lovisi is back for the final story, The Devil’s Minions. The Phantom has a lead on a second-story thief, and is watching an apartment when he sees the thief exit a window and come down the fire escape. But then a cop enters the alley and talks with the thief. They are in cahoots, and speak of their boss, the Devil. The thief wants out, so the cop kills him. The Phantom captures the cop but an assassin kills the cop before he will talk. When Van enters the Clarion there’s a new secretary outside Haven’s office, and she listens in on their conversation. When she quits the job and leaves, she’s captured by the Phantom, but slits her wrists while tied to a chair. Her dying words tell The Phantom that “The Devil made me do it.” Unfortunately, it ends at this point, so I’m not sure if this was supposed to be the full story or merely a come-on for Gary’s next story in Volume Two.
And I do hope there is a second volume. Airship27 has released a volume of Dan Fowler, and now The Phantom Detective, and I would like to see more of them both. Yes, there were some minor problems with this volume, but I highly recommend it for pulp fans of The Phantom Detective.