The year was 1933. Filmmaker Carl Denham had captured the stupendous monster he had dubbed “King” Kong. But that was only the beginning. Denham was determined to get the dethroned ruler of Skull Mountain Island back to America, and cash in on the greatest wild animal capture in human history.

The saga of how Kong was taken in chains from his Indian Ocean kingdom to New York City has never been told. In order for the cargo freighter Wanderer to make the long transit to the Atlantic, she is forced to circumnavigate Africa––jungle home of the legendary Tarzan of the Apes!

Here is the long-anticipated clash between the Monarch of Skull Island and Lord of the Jungle.
When the largest anthropoid who ever lived encounters the savage superman raised by the great apes, will they make peace––or war? 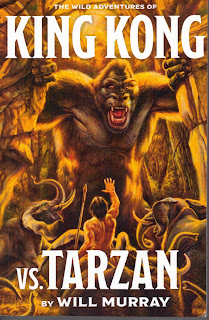 “An Epic Adventure For Modern Times.”

We are familiar with the capture of King Kong on Skull Island, and his eventual death in New York, but in this tale, the author details Kong’s journey from Skull Island, and how he was kept sedated for much of the trip, until problems arose, and the giant monarch of Skull Island escapes onto the African continent. Traveling from Skull Island, Captain Englehorn warns Carl Denham that the passage through the Suez Canal might not be a good idea, and he turns his ship, the Wanderer towards the African coast where they hope to find more food and supplies for the voyage and avoid official scrutiny of their cargo.

They reach the African coast before the storm sinks the ship, but Kong soon awakens and breaks loose. Now he’s afoot in Tarzan’t domain, and the Jungle Lord doesn’t like the damage he is causing. It’s truly a wild adventure, as Tarzan, To-Yat’s ape tribe, and Jack Driscoll and his ships crew all chase after the mighty Kong.

The reader is in for a treat. Will Murray’s writing is smooth and fast paced, and his characters come alive. Kong is magnificent, and Tarzan is at his best in this story. Tarzan’s constant companions, little Nkima, the monkey, Jad-bal-ja, his golden lion, and Tantor the elephants are around for the action. An epic tale for the modern times, and highly recommended.

Tom Johnson
Author of JUR: A STORY OF PRE-DAWN EARTH